If Debbie Sutherland knocks a Democrat off the Board of Commissioners, she’ll have the Democrats to thank 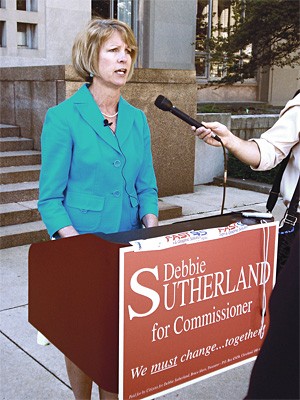 On a sun-bleached Wednesday morning, Debbie Sutherland props her elbow on a podium, crosses one turquoise pump over the other, and waits. A 53-year-old Chris Evert look-alike in pearls, Sutherland is standing on the steps of the county administration building, ready to make some bold proclamations. The trouble is, there's no one around to hear them.

It's precisely the sort of rolling-tumbleweed reception you might expect for Sutherland, the Republican mayor of Bay Village. After all, she's running for a seat on the county's Board of Commissioners, a body long viewed as an extension of the local Democratic party. That's why Sutherland was greeted this morning with an act of vintage-Cleveland subterfuge: When she arrived for her speech, the location was mysteriously under construction.

"They had to do it today, huh?" she'd asked with a knowing smile.

But now, with only a handful of campaign staff milling about and her husband fiddling with the Handycam, she faces a larger problem: Press conferences don't work without press.

Finally, a news van rolls past. It slows down for a second, then speeds up again.

"Is that Channel 19 doing a drive-by?" she deadpans.

Soon, though, another van shows up. And this one stops. Reporters mosey up, notebooks in hand. They're motivated, it seems, by the same thing that has people treating Sutherland like a real candidate: a seemingly weary public. When every week brings a new revelation of patronage, thievery, or plain old idiocy, someone new and fresh just might have a shot. Even if she does wear Republican pinstripes.

"It's a safe statement to say that people in Cuyahoga County are fed up," says Parma Heights Mayor Martin Zanotti, a Democrat. "No region is well served with total one-party domination. We need dissent."

That dissent has come in an unlikely candidate. Sutherland's first job was at Higbee's, and she studied fashion merchandising at Bowling Green, seemingly destined for a job making people prettier. But she returned to Bay Village after college and, while raising two daughters and running a consulting firm with her husband, volunteered for the PTA. Later, she was elected to city council. Then, in 2000, Bay Village's mayor quit, leaving council to pick an interim boss. They chose Sutherland.

Running Bay, a mono-toned suburb of 16,000, Sutherland rarely made news. Among her biggest headlines: the time she fired a crossing guard. But she did make allies among other suburban mayors.

"Certain people just show leadership potential," says Bruce Akers, the Republican mayor of Pepper Pike. "When Debbie spoke, she made good sense. You take note of a person like that."

Her focus first moved away from Bay's shores in 2002, when she was chosen to serve as treasurer for the county's Mayors & City Managers Association, a monthly pow-wow for area leaders. She organized field trips to Columbus, encouraging other mayors to testify when bills affecting their cities were on the docket. She even convinced Frank Jackson, Cleveland's typically invisible mayor, to show up for their monthly meetings.

With Sutherland's larger regional profile came whispers of a run for state office. She'd been courted by GOP higher-ups before, but with two school-age daughters, she wasn't ready to spend half her year in Columbus.

But last year, with a soon-to-be empty nest, she made her move. In December, at the Rock Bottom Brewery on the Flats' West Bank, she announced that she would take on Cuyahoga County Commissioner Peter Lawson Jones. The Plain Dealer promptly dubbed her "serious contender," the first from her party in a decade.

To some, Sutherland seemed to be aiming at the wrong target. Jones, the logic goes, is the one commissioner who occasionally displays some sense of economic reality — the lone guy who questioned buying the Ameritrust Tower and raising the sales tax for a medical mart.

"Jones is probably the best liked of all the commissioners," says James Potter, a Bay Village businessman who ran against Sutherland in 2005. "I would've preferred she run against one of the other two."

But Jones, despite his obvious efforts to position himself as the Other Guy, represents the Republicans' best chance to win. Dimora and Hagan are institutions, practically cemented in local politics, and they've wisely pandered to wealthy developers (and loyal contributors) like Sam Miller and Dick Jacobs. Elected in 2002, Jones is the least entrenched and the most vulnerable. Call it politics of the Serengeti: Spot the weakest in the herd and pounce.

The eat-or-be-eaten mentality is a necessity for Republicans, who haven't had an elected commissioner since 1992.

"Let's not kid ourselves — we've got our work cut out for us," says Akers. "But if anyone can do it, it'd be Debbie."

And if ever there were a year, this might be it.

Then things started getting weird. In April, a livid, paranoid Dimora ejected two PD reporters from a meeting after they asked why a former strip-club manager was drawing $50,000 a year from the county for a job no one could identify. Even for the reliably dysfunctional county, it was an immeasurably strange outburst.

Two weeks later, Recorder Patrick O'Malley abruptly resigned, pleading guilty to obscenity for images the FBI found on his computer. Incompetence, corruption, even incoherent blabbering — those are punches Clevelanders can roll with. But tell them they elected a creep, and they're likely to start swinging back.

All the while, Dimora — head of the local Democrats — has been hunting for party moles. Parma Heights' Zanotti was one such casualty. After appearing with Sutherland at the Rock Bottom press conference, Zanotti says he was threatened by Dimora. He later defected from the party.

"It's insane to think the best candidate is always going to be a Democrat," says Zanotti. "If we hold to that, how are we ever gonna fix our problems?"

We aren't, Sutherland says at the podium, once enough of a crowd has gathered. And it's quite the crowd now: cameras from every TV station, reporters from The Plain Dealer, even someone from public radio — a crowd sometimes believed to be allergic to Republicans.

"We've lost people, Fortune 500 companies, and revenue," Sutherland says. "We have the highest sales tax in the state."

She wraps up her speech and takes some questions. A reporter asks about patronage. In Bay Village, Sutherland says, she wasn't allowed to hire relatives.

If the commission did that, the reporter happily responds, wouldn't everyone in county government be out of a job?

"Here they would be," she says. The line earns a few chuckles, but by the next morning, it's clear that Sutherland is more than a press-conference punch line. She's front-page news.