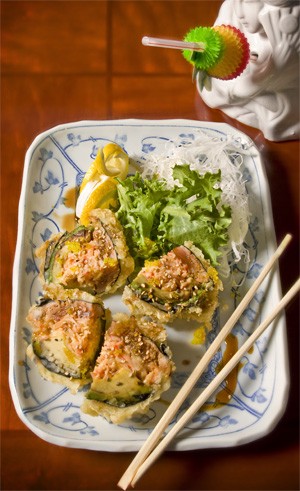 Fuel costs and the dollar being what they are, this probably won't be the year we jet off to the Far East. But that doesn't mean we don't crave a little adventure. So when we head out to one of our region's many Asian restaurants, you can bet we want to score something more exotic than spring rolls or won ton soup.

Variety would be nice; a little novelty could be good; and a touch of whimsy is always welcome. Lucky for us, that's just what we found at Ariyoshi, restaurateur Don Park's six-month-old eatery in Cleveland Heights. (The name, incidentally, roughly translates as "good fortune.")

After an 18-year stint as chef-owner of Westlake's Daishin, Park knows his way around the kitchen. His goal at Ariyoshi is to offer a broad lineup of authentic, homemade Japanese fare. And thanks to Mrs. Park, a Korean native, a few dishes like pungent kimchi (fiery fermented cabbage) and sweet-savory kalbi (Korean-style short ribs) also find their way onto the menu.

Prices are modest, service is friendly, and the hot finger towels are real cloth — not the inferior and ever more commonplace paper. But if there's a bump in the road to adventure, it could well be the restaurant's bland design. Basically nothing more than a big box, filled with laminate-topped tables and mismatched chairs, the room lacks warmth and intimacy. Factor in the high ceiling, uncomfortable banquettes, and wide-open floor plan, and it could as easily pass for a prep-school dining hall as a first-rate Japanese restaurant.

Plus, what's with the flat-screen TVs? Sure, the sound was turned off. But when diners have a taste for sukiyaki, do they really need to watch soccer at the same time?

Thankfully, once we got our hands on Park's big, colorful menu, we forgot all about the intrusive tellies. Ariyoshi's selection is truly impressive — starting with sushi and sashimi (crafted from fresh-from-the-coast offerings that Park picks up at the airport three times a week) and ending with traditional shabu-shabu, cooked tableside for two.

In the mood for hibachi-style chicken, salmon, steak, or shrimp? The kitchen is standing by. Craving some slurpy udon? They've got that too. An assortment of salads, sashimi, tempura, and teriyaki, arranged in a lacquered bento box? Check. Broiled yakitori? You betcha. And best of all, there's an intriguing collection of more than two dozen unusual appetizers — think of them as Japanese tapas, maybe — which easily could be assembled into an adventurous meal.

Take that "monkey brain," for instance. Before you get on the horn to PETA, let us assure you that no primates are injured in the process. Rather, the cranium in question is actually a buttery ripe avocado — peeled, seeded, stuffed with shredded crab stick, tuna, and spicy mayo, then wrapped in nori, dunked in tempura batter, and deep-fried to a frangible turn. A playful, plushly pleasing array of contrasting textures, temperatures, and flavors, it beats a real fried brain by a mile. For a final touch of whimsy, wash it down with a sweet, kitschy "umbrella drink," sipped from a ceramic coconut.

(Besides the retro cocktails, sake, plum wine, and Japanese beer are also available.)

We found another fun nosh in the negi maki, tender sliced beef wrapped around a filling of crisp scallions and served with teriyaki dipping sauce. On the map for future exploration: starters like steamed spinach (oshitashi), broiled clams, "Oriental style" pan-fried pizza, and cold tofu on ice.

As for the sushi, we've seen bigger portions and more glammed-up presentations. But for freshness, flavor, and quality, Ariyoshi stands among the best in town. That includes the thick sheets of velvety tuna and satinlike yellowtail nigiri sushi; and the special Fuji Roll, a rice-wrapped combo of crab stick, avocado, and shrimp, napped with pristine salmon slices. Even the fish-free Fashion Roll — cucumber, avocado, pickled daikon, asparagus, and spicy mayo — was memorable, thanks to a captivating combo of crunch, creaminess, and piquancy that belied its humble ingredients.

Among the sampled mains — mild, somewhat boring udon-tempura soup; gently broiled scallops in a delicate miso sauce; and marinated, charbroiled strip loin, tossed with a savory blend of soy sauce, sesame oil, sugar, and garlic (the Korean-style yakiniku) — our favorite was tonkatsu, a sort of Asian riff on schnitzel, featuring a fork-tender, deep-fried pork cutlet in a supremely crisp panko breading. Served with sticky rice, stir-fried broccoli and carrots, and a sassy Worcestershire-based dipping sauce, it was a homey triumph of East-meets-West cuisine.

For dessert, ultra-rich ice cream in ginger, green-tea, and red-bean flavors made suitably sweet endings. Or you could do like we did and scoot on over next door to Lopez for a cup of cayenne-goosed Mexican Hot Cocoa (chocolate liqueur, Patrón XO, and coffee) and a snifter of Centenario.

Admittedly, it makes for a culinary mash-up. But like all true tabletop adventurers, in our search for savory interludes, we recognize no borders.