In Cleveland Public Theatre’s In the Continuum, AIDS is equally ravaging for women in Africa and L.A. 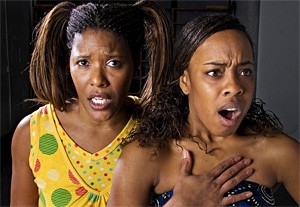 Having any serious disease is a terrifying and isolating experience. But when the factors of race, gender, and class are mixed in, as they are in the Cleveland Public Theatre production of In the Continuum, the chances for personal devastation are raised even higher.

The sickness in question is HIV/AIDS, the still-prevalent disease that, in this play, distorts the promising lives of Abigail, a TV newsperson in Zimbabwe, and Nia, a 19-year-old Los Angeles woman with a facility for poetry and tendencies toward kleptomania and self-delusion. Written by Danai Gurira and Nikkole Salter, the work consists of two one-woman shows, staged side by side in alternating scenes. And while there are some weaknesses in both the writing and performances, the production as a whole is still profoundly affecting.

After a brief opening scene in which the two women, as young girls, play an imaginary game together, their worlds separate as they begin to deal with their double diagnoses: Each is pregnant and saddled with AIDS.

In Zimbabwe, Abigail talks about her career and family plans (she was infected by her husband), but her bright horizons are quickly darkened by the societal pressures applied to women with AIDS in that often-brutal African country. Other than Abigail's segments, there are monologue scenes by a sex worker, a nurse, a maid, and even a witch doctor.

Nia's stateside story is, of course, very different from Abigail's. She acquired the HIV retrovirus from her boyfriend Darnell, a professional athlete whose basic attitude is represented by his absence. Instead, we hear from a social worker, a cousin, Nia's uncompromising mother, and Darnell's mother, who attempts to buy Nia's silence with a $5,000 check.

Although there is plenty of pain to go around in these sadly linked stories, the script also has touches of humor. Much of this lighter side is supplied by Kimberly Brown, who wonderfully crafts different and believable characters, including Nia. She is particularly engaging when Nia dismissively explains how easy it is to impress some folks with her poetry, offering a couple of obscene haiku as examples. But after she is fired from Nordstrom for stealing, her dependence on Darnell grows.

As Abigail, Bianca Sams has a lovely and lilting accent, but, with the exception of the witch doctor, her characters all speak with the same tempo and inflection. In addition, the speed of her delivery sometimes makes it hard to catch all her words.

Director Tony Sias and his two actors fashion some memorable moments in this 85-minute performance, but ultimately the playwrights' format of self-contained monologues starts to wear thin and loses theatrical momentum. Even so, the downbeat ending feels appropriate and leaves you wondering when we will ever stop punishing the victims.