In Doubt, at the Cleveland Play House, there’s little question about a priest’s priestliness 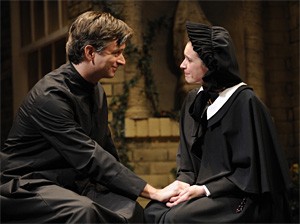 Will you be alive to see tomorrow's sunrise? Chances are, you feel pretty certain you will, but there's always that sliver of doubt. This wrenching tension, the feeling that nothing is a given, is a prime element of the human condition and is explored in Doubt: A Parable by John Patrick Shanley, now at the Cleveland Play House.

In this case, the uncertainty revolves around a possibly pedophiliac priest in a Catholic school in 1964, long before a number of men of the cloth were exposed as rapacious sexual deviants. Shanley's script is a marvel, weaving intriguing sermonettes into the mystery story, but the performances lack the subtlety necessary to keep doubt alive.

Almost-elderly Sister Aloysius, the principal of St. Nicholas in the Bronx, is a starchy woman who has fixed ideas about everything from ballpoint pens (hates 'em) to art and dance (hates 'em). Much more easygoing is Father Flynn, a younger man whose personal charisma and belief in a more accessible church the principal finds abhorrent.

But when there are murmurs about what Father Flynn might be doing with an eighth-grade boy — the school's lone black student — Sister Aloysius seeks to uncover the truth. She is aided in her task, somewhat involuntarily, by rookie Sister James.

There is substantial depth in Shanley's words along with flashes of humor, as the two Sisters struggle to explore such a devastating topic. Unfortunately, the cast members, under the direction of Seth Gordon, draw their characterizations in large strokes and often rush beats, which sabotages some of the more nuanced moments.

In the role of Sister Aloysius, Barbara Andres has an unrelenting visage, but there's an edge missing from her delivery: the tone of a woman who has lived her life in the comfort of cosseted religious certainty until now. Similarly, Michael Frederic is pleasant enough as Father Flynn, but his charm isn't so convincing that you simply couldn't believe he could do such things to a boy in his charge. Thus, the confrontations between Sister A. and Father don't spark as they should.

It also doesn't help that Jennifer Ruffner, as Sister James, overplays her innocence and at times lapses into almost silent-movie-style emoting. And a critical scene, in which Sister Aloysius consults with the boy's mother about the situation, loses its power when Cherene Snow, as the mother, plays righteous indignation rather than pained dignity.

Due to a denouement that is a bit too obvious, little doubt remains at the curtain. Not an ideal conclusion for a play so titled.