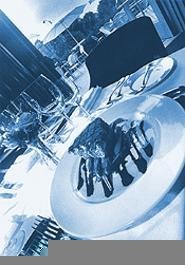 The gray-and-black-clad servers began their well-orchestrated dance a few minutes before 8 p.m.

"Fifteen minutes, 15 minutes," they announced softly, as they padded from table to table. "You have about 15 minutes to curtain."

And in the ensuing quarter-hour, as the Cleveland Orchestra's Saturday night patrons left to take their seats in the recital hall, Severance the Restaurant went from a bustling, energetic dining spot to one of the quietest rooms in the house.

Restaurant manager Amanda Winter of New York City-based Restaurant Associates -- which runs more than 200 restaurants and foodservice operations nationwide, including dining facilities for the Metropolitan Opera House and Kennedy Center, as well as for Severance Hall -- says this pre-concert exodus isn't unusual. While the response from concertgoers has been good, the open-to-the-public restaurant isn't yet attracting a big crowd of "off-the-street" diners.

That's a shame, because we found the elegantly understated decor to be relaxing, the service polished, and the food well-prepared and beautifully presented during our most recent visit.

The 180-seat space, which opened in January, has taken a few hits from critics for its modest ornamentation, which is in glaring contrast to the opulent, newly restored concert hall that surrounds it. But while it is true that the restaurant's most prominent decorative feature is its simple, fluted woodwork -- set against shiny, black-granite-topped tables, dark upholstery, and deeply hued carpeting -- the overall result is fresh, crisp, and contemporary. Add in the uplifting effects of plenty of sunny windows, mounds of fresh flowers, and as daylight fades, subtle lighting from an assortment of deco-style torchères and wall sconces, and the room's appearance can compete with most other dining spots in Cleveland's upper echelon. (A secluded terrace will also be available during the summer for alfresco dining.)

Executive Chef John Krummrich (who worked in Chicago before coming to Hudson's Inn at Turner's Mill, and Natalie's and Treva in Akron) and Sous Chef Dean DiLuciano (formerly of Classics) have developed a small menu of appetizers, entrées, and desserts that, with their delicate flavors and dainty appearances, seem well-suited to the room. While early press releases for the restaurant promised "global cuisine," with French, Ethiopian, Asian, and Italian accents, the present offerings, while stylish, are far from exotic or cutting-edge. First-course choices range from calamari to a smoky chilled asparagus soup; the six current entrées include pasta, chicken, lamb, beef, and two fish; and desserts -- from a Grand Marnier crème brûlée to cappuccino-ice-cream-filled profiteroles -- seem to fall pretty solidly in the classic European camp.

Prices, too, have been adjusted a bit since the restaurant's inception. While a menu from early winter showed three of five main-course offerings weighing in at over $30 (the point at which many Clevelanders start to balk), the present selections range from a relatively wallet-friendly $17.50 to no more than $28.75. (At the same time, a few dessert prices have crept up a dollar or two, perhaps in compensation.)

In fact, the least expensive entrée -- Shrimp and Scallop Pasta -- was by far the most robustly seasoned of the lot, with oodles of fresh saffron-scented pappardelle noodles tossed with chunks of creamy scallops and juicy shrimp, chopped red tomato, asparagus tips, artichoke hearts, and aromatic fresh basil leaves, in a light tomato-and-basil-infused olive oil. The summery dish tasted as fresh and full-flavored as if it had just come out of a kitchen garden, and we jostled one another to spear "just one more forkful" throughout most of the evening.

We were also delighted by the beautifully presented Sesame Seed-Crusted Tuna: four thick, rosy medallions of buttery medium-rare tuna "wrapped," sushi-style, in a coating of crunchy black sesame seeds. The faux tuna norimaki formed a semicircle around a portion of slender haricots verts, accented with strips of roasted red pepper, that were settled in the middle of the white dinner plate. And rising from the back of the dish was an upended nori-wrapped roll of jasmine-scented rice that had been dipped in a light tempura batter and deep fried until just barely crisp. While the plate's scant garnish of wasabi oil and citrus sauce was scarcely noticeable, the light dish -- with its contrasting textures and honest flavors -- was entirely satisfying.

A vertical presentation of grilled filet of beef, resting on roasted baby carrots and asparagus tips, and anchored by a thick potato-leek pancake, was also appealing to both tongue and eye. The medium-rare beef was especially tender, with more juiciness and flavor than diners generally can expect from a filet, and the coarsely shredded potato-and-leek cake was vaguely sweet, with a pleasant crispness about it. A little shower of sweet and tart balsamic reduction syrup made a savory counterpoint to both meat and vegetables, and a bit of peppery mustard oil lent some depth.

But as rich as the filet was, that's how bland the eight-boned rack of lamb tasted. Although the meat was rare and juicy, it had little depth of flavor. The delicate herbed crust wasn't enough to give it oomph, and even the tiny bit of thick, ruby-red wine reduction sauce -- which was bursting with flavor, but in short supply -- failed to raise the lamb above the simply ordinary. Fortunately for us, the dish was perked up by a well-seasoned ragout of luscious flageolet, cannellini, and black beans, seasoned with garlic, tomato, onion, and basil, that underpinned the lamb and herded it in the right direction. (But then again, when a side of beans is more exciting than the meat that it accompanies, the kitchen may wish to reassess.)

If the lamb could have profited from a more exuberant use of sauces and seasonings, that was also a flaw in the appetizers, which, good as they were, could have become extra special with more robust accompaniments. Take the Crispy Calamari: a modest portion of tender, perfectly prepared rings and bodies that were light and delicate enough that they threatened to float off the plate. They were so subtly sweet and flavorful, in fact, that they had little need for a rich sauce -- which was a good thing, because the buttery beurre blanc upon which they rested was quite bland. Likewise, three quivering, barely cooked Pan-Seared Scallops had plenty of fresh ocean flavor of their own, so we didn't have to rely on the fruity but otherwise flat-footed mango, corn, and red onion "salsa" to jazz them up.

However, a big bowl of cool, creamy asparagus soup was bolder. Silken and well-rounded, like a perfect vichyssoise, the soup became even more complex and interesting when ignited by a few artful squiggles of crème frâiche and a floret of thinly sliced smoked salmon.

The wine list is an interesting collection of predominantly French and Californian products, including an unusually wide variety of reds and whites. Most offerings are by the bottle, with a small and, pour for pour, much more pricey selection by the glass. That is not to imply, however, that the bottles are bargains: With only one selection under $30 and many of them in the $50 to $80 range, matching a meal here with wine is likely to add up.

Speaking of expenses: Rest assured that desserts at Severance are worth the splurge, from either a financial or caloric perspective. We are still dreaming about our Hazelnut and Caramel Tart: a wedge of sweet shortbread crust filled with whole, roasted hazelnuts in a matrix of buttery caramel, topped with a flounce of whipped cream and a tiny fresh mint leaf. Gooey, chewy, and sweet, its nutty flavor reminded us of warm biscotti. Almost as decadent was a miniature fruit tartlet: a little round pastry filled with thick lemon custard, juicy raspberries and blueberries, and a scoop of smooth, rich raspberry sorbet. The tart was coyly sided with a pretty pool of crème Anglaise, in which three chubby little hearts had been drawn with ruby-red fruit coulis.

An individual bombe -- a layer of tender sponge cake topped with a scoop of milk-chocolate-and-Chambord mousse, and enrobed in smooth chocolate ganache -- was also excellent. The same "hearty" crème Anglaise sided the little chocolate sweetie, along with a pile of crunchy pistachio-caramel brittle that was so good, we managed to find room for every last crumb.

As for service, it was nearly flawless, with all the niceties attended to by a staff of formal but never aloof professionals. This was in marked contrast to a much earlier visit, when uninterested assistants were spotted roaming from table to table with plates in hand, trying to discern who ordered what.

This type of steady improvement -- combined with the very good work being done in the kitchen -- makes it seem likely that Severance the Restaurant will reach its eventual goal of becoming one of the city's top dining destinations. And with the Cleveland Orchestra about to move to its summer home at Blossom -- taking the restaurant's current concertgoing patrons with it -- let's hope the word spreads soon.