In the Night Market

Even when the bakers aren't baking, the West Side Market Café's still shaking. 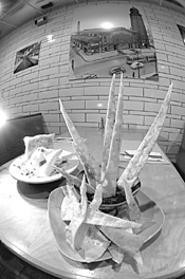 After dark, and minus the fruit vendors, flower peddlers, and stocky, sensibly shod babushkas and their two-wheeled shopping carts, the monolithic West Side Market is a somber place. At the age of 93, it seems to slumber fitfully, its rest interrupted by dreams of pierogies and prime beef, kiwis and kidneys; an after-hours foray into its metaphorical belly feels like a grave intrusion upon its privacy.

But the invitation has been issued, and it seems absurd to stand gaping outside the Lorain Avenue entrance while the neon signs hum OPEN and BEER.

"What else do you need to know?" demands a hungry companion, before shoving us out of our reverie and toward the door of the West Side Market Café.

Of course, there has been a modest eatery in the southeast corner of the circa-1912 market for as long as anyone can recall; on the other hand, until recently, none of us can recall ever actually wanting to eat there. But since industry vets Mark Chase and Frank Wielgosiek (manager and chef, respectively) began operating the space last summer, the ick factor has been pretty much eliminated. Now all cleaned up, newly appointed, and offering a big menu of Cleveland-style comfort foods, the reimagined café is tidy and comfortable. Still, we can't control the pleasant shudder that tickles our spine as we step out of the cold and into a dimly lighted scene that would have made Edward Hopper run to grab his brushes.

That's the great thing about occupying a vintage space: All the ambiance you could ever hope for is there and waiting, and as the proprietor, all you have to do is get out of its way. So it is, then, that the café hasn't been so much decorated to feel like something from another era -- it simply is out of another era, with its shiny subway tile walls, patinated terra-cotta floors, and tall, broad windows that look out onto the city streets. Add some modern touches, like a shiny copper bar top, a couple of televisions broadcasting the Food Network and ESPN, and a few orange-painted accent walls, and the result is a space that feels as rooted, authentic, and animated as the West Side Market itself.

Now, at 7 p.m. on a Saturday, the tiny café is bustling, as a score or more of the market's indoor vendors celebrate the end of their workweek with smokes and well-drawn pints of Dortmunder Gold ($3.75) and Warsteiner ($2.75). (There is a small selection of modest, inexpensive wines, too; but somehow, in this working-man's setting, even value-priced wines seem pretentious.) At the point when we grab our seats, the vendors still are mostly gathered in front of the small bar, throwing back beers; but as the evening grows older, small knots of them break off and settle in at one or another of the shiny wooden tables and start to peruse Wielgosiek's dinner menu.

More than most local chefs, Wielgosiek has the tastes of Cleveland running through his veins, and his menus -- whether here or at former haunts like the old Hi & Dry or Capsule, back when it was a restaurant -- are mainly a celebration of the flavors that have made this city plump and proud. In his present gig, the chef's hand is revealed in everything from creamy paprikash soup, rife with tiny flour-and-egg dumplings and shreds of chicken, to tender planks of luscious homemade meatloaf, deliciously streaked with roasted-onion demi-glace, on a bed of buttermilk mashed potatoes. It's contemporary comfort food at its best, which is to say it's familiar enough to satisfy Grandpas Stash and Tony, yet modern enough to delight their worldly grandchildren.

To stock his pantry, Wielgosiek relies on the freshest ingredients -- a claim supported by the well-structured flavors found in everything from a small side salad of juicy crisp greens, to the lush ground sirloin in the massive Black and Blue Burger, piqued with bacon, blue cheese, and all the trimmings. A starter of Italian-style torta -- a tall, brightly colored stack-up of butter-enhanced cream cheese, pesto, and sun-dried tomatoes, just begging to be slathered onto thick, crusty slabs of lightly toasted bread -- vibrates with the edgy essence of fresh basil, garlic, and red-pepper flakes. Chicken pot pie -- slowly simmered chicken, carrots, celery, and peas in creamy gravy, topped with an ephemeral pouf of puff pastry -- shimmers with the flavor of fresh thyme.

Napkins and placemats are paper, yes. But grace notes sound in the better-than-expected tabletop accoutrements, including shiny, substantial flatware, colorful Fiestaware plates, and frosted-glass oil lamps that throw pale shadows on the white tile walls. And when Chase, tonight's manager-cum-server, drops off our salads and then returns with a giant wooden pepper mill to do the honors, we can't help but smile at the gracious, if unexpected, gesture.

While dinner has been served only since December, breakfast and lunch were on the café menu well before then. There is no better way, after all, to work up an appetite than strolling the market's aisles, contemplating the dizzying array of produce, bakery, meats, and spices. And responding to those early-morning cravings with, say, a smooth cuppa joe (with real cream, poured from a little pitcher) and a stack of tangy buttermilk pancakes topped with thick wedges of cinnamon-sautéed apples, done to a buttery turn -- or a portion of lean, pleasantly spicy chorizo-and-potato hash, served with two gently scrambled eggs and a trio of warm flour tortillas -- seems ever so satisfying. Our lunch-time stops have left us satisfied, too; unfortunately, though, we can't go on at length about the midday offerings, since we have never been able to get beyond Wielgosiek's scrumptious meatloaf.

But tonight, perhaps spurred on by the spirits of the market, we have sampled our way through nearly a dozen dishes, until our belts have grown snug and our buttons threaten to pop. Still, when Chase comes around peddling huge wedges of pie -- Key lime, with a fluffy head of moist meringue, and crumb-topped peach-and-blueberry, both from market vendor Dennison Pies -- and mugs of freshly brewed decaf, we can't bear to turn him down.

"You came during our noisy night," Chase says with a mix of cheer and mock annoyance, above the laughter and the music. "Last night, you could have heard a pin drop."

Let's hope that changes soon. For authentic ambiance, good food, and great value, today's West Side Market Café is a hidden gem. And come the dinner hour, when the surrounding market is quiet and dark, its sparkle doesn't dim a bit.