In the shadow of Iron Man, The Incredible Hulk can’t live up to its billing 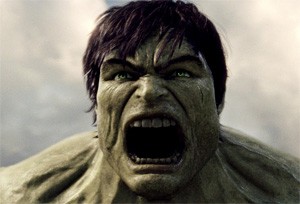 In recent days, Universal's been running an ad for The Incredible Hulk that gives away a predictable cameo: the appearance of Robert Downey Jr. as Tony Stark, aka Iron Man. From the delighted, deafening squeals of at least one sneak-preview audience, it's clear that the thought of an all-star Marvel Comics team-up — Avengers, assemble! — isn't a bad idea.

Of course, it speaks the fate of the Hulk franchise that they've spoiled the spoiler for this complete reboot. For months, stories have circulated that the persnickety Ed Norton (who replaces Eric Bana from the 2003 version) was demanding final cut over a screenplay he's said to have beefed up with chatty character-building sequences since excised. Add to that the critical drubbing that the 2003 take, directed by Ang Lee, rightly received, and there's an inevitable and justly deserved fear: Hulk no smash. Cheers to lower expectations, then, because The Incredible Hulk is The Pretty Good Hulk. All things considered, of course.

It's still a superhero movie, with all the attendant noise and nonsense — and this time around, blessedly, the goofy geek's grin. Having dispensed with the origin story in the first film, the Incredible Hulk is born again. Bruce Banner's on the run, he turns into the Hulk, he smashes some stuff, he meets up with gal-pal Betty Ross (Liv Tyler). Rinse, lather, repeat.

Lee tried to mix the somber and the silly — and all he ended up with were wide-screen comic panels, gone deadpan and limp. Director Louis Leterrier (The Transporter, really) and screenwriter Zak Penn (X-Men: The Last Stand and the forthcoming Marvel march) have far less interest in inner angst; their fascination and affection lie with the outer kaboom, bringing action to action sequences that Lee staged with the embarrassment of an artiste slumming in pornography. Abetted by a Hulk who's far less glossy and hollow than his predecessor, who looked like a wet gummy bear on HGH, Leterrier takes full advantage of improved technology and sets his he-man to smashing up and down Brazil, Virginia, and Manhattan — Harlem, to be precise, where it's most definitely Showtime at the Apollo. Oh, and the climax here isn't an afterthought, as it was in Iron Man.