Never mind the music: The Party Dream's balls-out silliness is catching on. 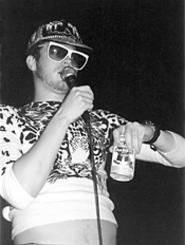 We haven't even been properly introduced to Gil Mantera yet, and already he's shown us his family jewels. We're at the Bug Jar, a hip rock club in Rochester, New York, that's decorated with, among other things, a painting of Spider-Man flipping the bird. It's Saturday night, and Mantera is working it. Sporting faux-fur-adorned moonboots, a rat-eaten mustache that looks as if it was swiped from the props department of a '70s porno movie, a loincloth, and a fringed vest with no shirt underneath, Mantera has his leg propped up on his keyboard, offering a view of his tight leather briefs and -- perhaps inadvertently, perhaps not -- a peek at his stones.

"I have pictures of his actual penis out onstage," the Ultimate Donny says over beers a couple of days later. Mantera's brother and bandmate, Donny can relate to Gil's penchant for exposing himself. "In Frostburg, Maryland, I had girls' bikini bottoms on. I look down, and my balls were hanging out."

Back in Rochester, Donny's ass is following suit. Clad in rainbow-colored chaps that reveal leopard-print underwear, Donny is a blur of sweaty, sexed-up soul fire. He sings like Bobby Brown in a bear trap, as Gil bangs out rudimentary rhythms on a dented synth. The result is something of a cross between the bawdy beats of Peaches, the skewed, scatological randiness of the Butthole Surfers, and the bonehead bravado of Andrew W.K. And somehow, it all works, thanks perhaps to Donny's fairly impressive range and Gil's quirky, infectious songs.

Gil and Donny spend their performances bouncing off a trampoline -- and each other -- breakdancing all the while. "This song is about that one bitch that gave it up to all the dudes on Welcome Back, Kotter," Donny announces. Then he takes off his pants and humps the stage.

"It's like Cirque du Soleil on crystal meth," one spectator says. Perhaps a disco Jackass is more like it, or The Gong Show taped in Studio 54. Either way, the shitfaced shenanigans of the Gil and Donny Show have quickly won over another crowd. The action stops only for Donny's frequent pauses to berate the hapless Mantera.

"I like the kid, 'cause he's my brother, but he pisses me off because he's not really smart, and he screws shows up a whole lot. He's always messing something up."

It all adds to the group's drunken, delirious charm. The more out of hand things get, the better. But exactly how things ever got so out of hand for the Party Dream is a little less clear.

"We just realized that there are a lot of bad bands getting a lot of publicity and a lot of fans," Donny offers. "We're kind of bad, too, but we know it, and we know how to use it. I just love to entertain."

This much is obvious a few days later, when Donny (whose real name is Richie; his brother is Glen) visits Cleveland from his native Youngstown. We eventually wind up at Lou and Eddy's, a velvety West Side bar where Donny sings karaoke until the early morning. His favorite song to do is Creed's "With Arms Wide Open." He nails Scott Stapp's tremulous, overemotive delivery, mixing in pelvic thrusts befitting an epileptic Elvis.

Prince is another favorite. "I am for real up on this 'Purple Rain' bullshit," he bellows before breaking into the tune with serious force, much to the delight of the bar's late-night patrons -- two black ladies and a large white woman who picks her teeth onstage. Oddly, while virtually every aspect of the Party Dream is a joke, Donny's vocal ability certainly is not. Somehow, that makes things even funnier, like Justin Timberlake crooning "Pop That Pussy" -- which, by the way, the Party Dream samples in Rochester.

"The Ultimate Donny is about rockin' as hard as he can," he explains the next day. "He's about love, he's about being the ultimate. During the show, my persona is that I'm the biggest ladies' man. But at the same time, I'm very sensitive. I talk about how I do every lady and how some girl hurt me terribly. Gil Mantera, I think his whole thing is that he's just a psychopath. He plays keyboards, he has a shitty mustache, he dances like a maniac. In Columbus, he'll go out and dance on the tables. Doesn't matter how many drinks are on the table -- he'll knock them all over, break glass all over the place. I guess that's acceptable, because we have 300 people there buying drinks."

Indeed, the Party Dream has developed a loyal following in Columbus, where 21-year-old Mantera lives and goes to school, as well as Donny's home base of Youngstown. It all began about two and a half years ago, when Donny and Gil formed the short-lived outfit Party Talk with a mutual friend. Unlike Party Dream, Party Talk was basically unmusical; its shows were exercises in audience torment, featuring retarded electro and some curious, uh, "magic" tricks.

"One of our magic tricks was this: Ryan, the third member, shaved off his pubic hair, we put it in a pan, poured rubbing alcohol on it, lit it on fire, and danced around it," Donny relates.

Party Talk disbanded when a pubeless Ryan moved to San Francisco, and the Party Dream was born shortly thereafter. Gil and Donny have released Best Friends, a rough, somewhat unrepresentative album of convoluted dance numbers that makes the listener wonder whether the two subsisted on paint chips as youngsters. Proficiency has never been a factor, though: The band is all about the no-holds-barred live shows -- specifically the sight of two dudes kickin' it in their underpants.

"You go into a town and you have no idea what's going to happen," Mantera says over the phone from Columbus. "You go to these places and you say, 'Okay, we have this little act that could potentially piss somebody off for some stupid reason -- the homophobic people of the world.' In one instance, we were in West Virginia, and there was some guy who was just pissed off and did not like it. I was on the ground, gyrating in my underwear and shit, and he threw a beer bottle at me. It didn't hit me, but I think he was trying to make it explode, so it would shatter and I would get all cut up and stuff. Another time, somebody tried to fight me. That element doesn't really bother me, but it's irritating when it's taken to extremes."

Gil's words ring a bit ironic, since taking things to the extreme is how the Party Dream pays its bills. In many ways, these guys are more punk than most of today's punk bands, throwing themselves headfirst into anything that'll get a laugh, no matter how many stitches may be required.