With 2 Live Crew. Friday, April 25, at the Agora Theatre. 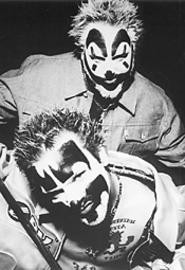 Forget Maggots, Deadheads, and the Kiss Army -- Juggalos are music's most devoted fans. Sporting Shakes the Clown face paint and postmodern hairdos, the devotees of Insane Clown Posse certainly know how to make an impression on concert night. You've gotta admire an audience that rocks with serial-killing, Faygo-drenching, breast-flashing abandon, yet adheres to a strict code of brotherhood and good looking-out.

Indeed, Juggalos are as much a part of an ICP show as the band, a Detroit horrorcore duo that's served millions with virtually no aid from radio or MTV. To accomplish this, ICP tours constantly, throwing carnivalesque spectacles that offer plenty of bang for the entertainment buck. And though the bouncy sing-along hip-hop that marked its early material has been slowly replaced by lumbering rock influences, ICP still has a few tricks up its sleeve. But by touring with bawdy rap pioneers 2 Live Crew, ICP suggests its collective halo might have slipped.