After 9-11, the feds left air safety to the food-court police. 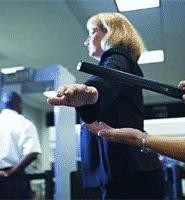 You've seen him rousting tweens at Orange Julius or pacing for hours around Dillard's lingerie department.

His weapons are usually a walkie-talkie, an official-looking uniform, and a decent-sized beer belly. After being inspired by a 10-hour marathon of Cops, he decided to find work in mall security, chasing the occasional shoplifter and guarding against food-court loiterers.

But thanks to a $28 million federal contract, he's now protecting the American traveler from terrorists.

"It's absolutely insane," says attorney Josh Cohen. "When I started working on this case, I really couldn't believe it. I was shocked."

At the time, airport security was run by private companies not much different from your everyday mall cops. The feds quickly realized that incompetence was a factor in the attacks and created the Transportation Security Administration.

Over the next year, TSA took over security at every airport in the country except five. These became guinea pigs in a pilot program that was intended to reintegrate private firms into the safety program as well as serve as a comparison to the performance of TSA.

The feds sent out 100 letters to security companies, inviting them to bid on the five jobs. One of them was Cleveland's International Total Services.

For 15 years, ITS provided services from screening passengers and luggage to cleaning planes at more than 100 airports in the U.S. and U.K.

But two days after 9-11, it declared bankruptcy. Mark Thompson, the company's one-time financial director, said that ITS had struggled ever since becoming publicly owned in 1997, and had undertaken an acquisition binge it couldn't afford.

ITS' reputation was also marred by security breaches. Shortly after 9-11, a man got through ITS security with a handgun and a pocketknife. In New Orleans, another man managed to sneak his derringer past ITS screeners. The errors cost the company its contracts with Southwest Airlines, which was fined millions of dollars for ITS' mistakes.

Robert Weitzel, ITS' former CEO and chairman, said that the bankrupt company had no intention of bidding on any of the TSA contracts. Instead, it began selling its existing contracts to other companies, including System Management Services, a Tennessee company that provided janitorial and security services to malls. Owner William Coakley wanted to branch out to airports.

Since SMS had no airport experience, ITS would only sell its contracts for cleaning planes, loading luggage, and the like. SMS was barred from using the ITS name to perform security-screening work, according to court documents.

Nonetheless, SMS submitted a bid for Kansas City International in which it falsely claimed that ITS was an "SMS-subsidiary" and that it had 15 years of experience in airport security. The feds awarded it the $28 million contract in Kansas City to screen passengers and luggage.

Daryl Shall, the TSA agent who worked on the deal, thought he was expressly awarding the contract to ITS, according to court documents. He had no idea that it would actually be taken over by mall security. "The contract itself has all these references to a company with great experience in airport security matters," says Cohen, Weitzel's attorney.

Shortly after, SMS created a new airport-security subsidiary, FirstLine Transportation Security, which is now run by former ITS employee John DeMell in Cleveland. (DeMell would not comment for this story.)

It wasn't until 2005 that Weitzel got wind of the contract. He was furious. The federal government had been defrauded by a bunch of hacks who clean malls, he thought. In the wake of 9-11, this was no joke.

Weitzel raised his concerns in bankruptcy court, accusing SMS of defrauding the feds. But in August, Judge Dorothy Eisenberg surprisingly ruled that Weitzel had shown no evidence of fraud. She ignored the fact that SMS had claimed a history of airport experience, contending that the boasting was simply "not worded as precisely as it should have been."

"The court recognized that SMS was properly awarded the contract," says SMS' attorney, Mike Scheier, who dismisses Weitzel as a "bad actor."

The U.S. Department of Justice also investigated the matter. Though SMS' name is nowhere to be found in the original contracts, and the TSA official who did the deal thought he was working with ITS, the feds now claim they knew they were working with the mall-security firm all along. "[SMS] is meeting all performance standards of their contract," says Carrie Harmon, a TSA spokeswoman.

The feds recently renewed SMS' contract through 2010. Lawyer Scheier defends the move. While SMS itself had little experience, "The people on the ground were people with decades of experience," he says.

Then again, it may be the kind of experience that got 3,000 people killed only five years ago.