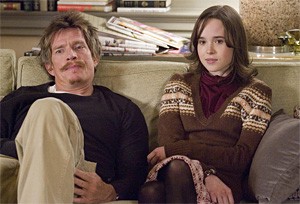 Smart people have no reason to live — and sure, that's not quite how Randy Newman sang it, but the point still stands. Because in Noam Murro's directorial bow, Smart People — one of those Sundance premieres starring famous people slumming it in dingy Indieland — the people ain't doing much l-i-v-i-n' at all. They're just drifting along, heads in hands, moping and groping their way toward another wanh-wanh tomorrow. Don't you get it? The title's ironic.

Take Lawrence Wetherhold, played by Dennis Quaid beneath a greasy mop-top and a brushy beard. He's a misanthropic college prof who, when he's not forgetting his students' names or altering clocks to duck office hours, is out peddling a pissed-off rant to disinterested publishers. He's also a crap single dad who has no idea what his children are capable of: His college-age son James (Ashton Holmes) is an aspiring poet worthy of The New Yorker, while his high-school-senior daughter Vanessa (Ellen Page) is too chickenshit to tell her father she got into Stanford.

Then another smart person's added to the mix: Dr. Janet Hartigan (Sarah Jessica Parker), Lawrence's former student, who still has a thing for the prof — understandable, as somewhere beneath the scruff is Dennis Quaid, but inexplicable, since he's a sumbitch sans class or manners. Their off-campus meet-cute takes place in a hospital, after Lawrence dings his head on concrete while trying to steal his towed-away car from the university impound.

So bastard meets beauty while heart meets brain, and the widower's slowly softened into something more easily recognized as "human." Which is all well and good, except Lawrence is more interesting as a prick — funnier, in fact more human than the guy who emerges from the hardened shell. And the movie never really gives a reason for his evolution. It just happens, not because it has to, but because it's supposed to — this being a movie about dumb-ass brainiacs obsessed with their own navels, but forced to consider someone else's belly button.

It's almost impossible to bear the film ill will, as it makes a case for compassion and tries awfully hard to be awfully sweet. But then what? Written by first-timer Mark Poirier, it's all action without any meaning, a beginner's-class screenplay populated by archetypes — the wise-beyond-her-years teen, the hard-boiled widower, the reckless and feckless half-sibling, the nice lady who rescues the dick from himself — who just do things until they run out of unhappiness.

Quaid tries awfully hard, lumbering with the gait of a battered, broken man. Everyone else feels like they're stepping into mushy, familiar footprints: How many times will Thomas Haden Church play the wisecracking ne'er-do-well, or Ellen Page be cast as the teen who sounds like a snarky 42-year-old? And Parker has two speeds nowadays: the humorless intruder who steps into a bastion of dysfunction, only to emerge loving and whole (see also: The Family Stone), and Carrie Bradshaw.

A colleague offers the perfect description of a film like Smart People, in which the plot lurches toward an obvious and not particularly well-thought-out finale: It's like the entire season of a sitcom, whittled to a single episode. There's no time for characterization, no room for emotion, no interest in anything other than moving the story forward. It's all action, no reaction. One minute they're miserable; 90 minutes later, they're all better.