Sure, it's stupid. But it might be a smarter play than a new convention center. 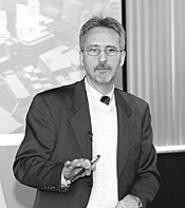 Will Voegele stands on the 42nd floor of Terminal Tower, a procession of photos and architectural drawings flashing on the screen behind him. The regional director of Forest City is making his case for a new convention center along the Cuyahoga River.

In an NPR-smooth voice, he talks of "skin costs," "connectivity," and "constructability." Here is a man in command of his game. By the time he's done, you're thinking to yourself, "Yeah, Will, you should build that thing."

Then you remember his opening disclaimer: "We have no interest in owning, building, or operating a convention center." You also notice how he's offered no evidence that a center would actually succeed. A smart man, which Voegele clearly is, doesn't make arguments that can be hammered like 80-mile-per-hour fastballs hung over the plate.

He's not alone among center proponents. Though we're about to invest $300-$500 million in public money -- and you can be sure it'll be your money -- no one has made a valid case that a center would thrive. They have, however, noticeably ignored the mountainous evidence that says it won't.

Here's what they're not telling you:

Since the late '90s, convention powerhouses like Chicago, New York, New Orleans, Las Vegas, and Atlanta have all seen their business drop by 20 percent or more.

Cleveland can't compete with these cities. We lack the size and the native tourist attractions. Our humble aspiration is to play on the second tier, where our deficiencies aren't so glaring. But here, unfortunately, the bad news becomes staggering.

Obviously, no private company would invest in a business offering such grave numbers. But trigger fingers get quick and due diligence is lost when you're spending other people's money. Which is why everyone from Council Bluffs, Iowa, to Tunica, Mississippi, has jumped into the game. While the industry was hemorrhaging, the number of competitors was multiplying like fat men at a pastry buffet.

And because more cities are chasing fewer customers, everything's priced to move. Many rent their space for free. Others pick up the tab for guest speakers. All the while, the taxpayer's bill rises.

Washington, D.C., spent $834 million on a new center. Return on investment: zero increase in convention attendance and hotel use. But D.C. residents are still picking up $60 million a year in operating losses, debt service, and marketing costs. Alas, these are investments that never stop siphoning.

In fact, new or rebuilt centers don't even guarantee that you'll keep your current business. St. Louis, a worn industrial city much like ours, spent a Saudi prince's fortune on the convention business -- even coupling its latest expansion with a domed stadium. A top accounting firm produced a fabulous study telling city leaders that money would rain from the sky.

Dennis Roche, director of the Convention & Visitors Bureau, is in the unenviable position of selling Cleveland to America. Ask a city leader for an example of a successful center, and they won't have an answer. But they will send you to Roche.

Give the guy credit: He acknowledges that nearly all centers lose money. He admits they're merely loss leaders for the hospitality industry. And he offers no prophecy that gold will be our mistress.

"We're not thinking a new center is going to wildly increase our business here," Roche says. "The question is, are we going to be in this game at all, or aren't we? Failing to rebuild a convention center is saying we're getting out of this business."

There's good reason why people like Roche lust after conventions. The average business traveler spends $700-$750 a day, he says. The leisure traveler: $125-$150.

But when asked to name a successful convention city, he points to Indianapolis. Its business has declined by one-third since 1999.

In other words, it's good money if you can get it. But nobody seems to be getting any.

There's little indication that things will improve. Advancements in teleconferencing mean fewer people need to meet in person. You can watch a seminar on your computer screen. Consolidation of industries means consolidation of purchasing. When the inevitable day comes that five companies control the entire U.S. hardware business, there will be no need for a trade show. The vendors will go to them.

Then there's the ever-tightening of corporate budgets, which are like girls on perpetual diets. They won't be happy till their ribs show, the better to please Mr. Shareholder. Convention line items are among the easiest cuts.

All of which makes this proposition akin to investing in VCR manufacturing. Sure, there's still money left to chase. But inventory is glutted, while customer demand is in hasty retreat. And the business you hunt will only get smaller by the day.

Worse, to bet on a center is to wager that Cleveland's business and political elite will somehow succeed where all others have failed. We'll allow you, dear reader, to provide the punch line for this joke.