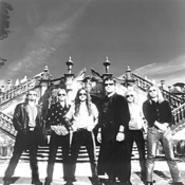 In casual conversation, it's difficult to nail just what made a concert great, especially if you're trying to trigger pangs of regret in a friend who foolishly passed up an opportunity to attend. You can praise the vocalist's operatic highs, recount the way three guitarists intricately tangled their notes, attempt to put into words a bass tone that rattles like an agitated fault line. But it's still a challenge to try and relate the excitement of a killer live show -- unless, of course, you're able to add, "Plus the singer had a sword fight with a robot, and later, a giant ghoul burst into flames."

Because of such flourishes, Iron Maiden is the ultimate "you-shoulda-been-there" band, a group that provokes as much envy after it leaves a tour stop as it does wide-eyed amazement during its time onstage. One of the only amphitheater acts for which a $50 ticket seems entirely justified, Maiden employs props that tower several stories above the audience -- zombies with coal-black eyes that occasionally burn like embers, man-shaped wicker superstructures that house screaming "virgins." Singer Bruce Dickinson soars above his bandmates, hang-gliding on angel wings. The Olympic-caliber fencer often finds reason to parry with some foe, much as the medal-winning gymnasts who starred in early Tarzan films could always seem to find a pommel horse in the jungle.

However, with Iron Maiden, the spectacle isn't a distraction from mediocre music-making (see Gwar, Rammstein). The group's three axemen (including early album mainstays Dave Murray and Adrian Smith) shred with astonishing virtuosity, lending classical-guitar complexity to rowdy pub-band rockers. Bassist Steve Harris's intrusive thumps add stealthy menace, like a deadly snake's rattling tail. Dickinson impressively prolongs notes with his Iron lungs, and his shrieks, which can sound shrill on disc, hit the perfect panicked pitch in concert. Original drummer Clive Burr assaulted his kit like a soccer hooligan with a tire iron; his amazingly named successor, Nicko McBrain, prefers a more controlled, deeper-toned attack. With all apologies to their countrymen in Queen, Iron Maiden's members are the real Live Killers, and the group's latest batch of concert albums certainly attest to this.

Eddie's Archive, Maiden's outstanding new boxed set that contains four discs of documented gigs and two B-side collections, provides plenty of inaudible perks, in addition to a deluge of rare and live numbers from the band's flamethrowing repertoire. For starters, the CDs come in a skeleton-embossed tin carrying case that resembles Satan's lunchbox. Inside, there's a skull-studded shot glass that, depending on the listener, provides a way to imbibe mead in gothic style or offers a subtle warning about liver disease and its toxic scythe.

There's also a yellowed scroll containing the group's players' full history, from early go-nowhere groups such as Gypsy's Kiss and Evil Ways to amusingly titled side projects such as Fish Vigil, Broadway Brats, and Psycho Motel. While the odds and sods discs present no evidence of any of these outfits, they do contain two relics of the "Entire Population of Hackney" project, characterized by chipper keyboards, cheery guitar leads, and a drumbeat that's more prancing pony than galloping horse. ("An unlikely Maiden track," band manager Rod Smallwood deadpans in his liner notes.)

On BBC Archives and Beast Over Hammersmith, Eddie's live double albums, the difference between working-class dog Di'anno and rock god Dickinson becomes clearer. Addressing a British crowd chanting "Mie-dun, Mie-dun," Di'anno tosses out a few polite "How are ya, then?" greetings, while Dickinson brings a similar bunch to a boil, building up every selection with a theatrical introduction. Regardless of the singer, though, Maiden's mind-blower is "Transylvania," a spellbinding instrumental in which the three guitars snarl and bark like Cerberus's heads. This tune appears four times on these discs (only "Iron Maiden," the group's signature bruiser, tops it with five), but each time, it finds fresh fuel, becoming resurgent rather than redundant.

Sure, Maiden can be an embarrassing band to embrace, and there are some skeletons in this Archive, from the absurd B-sides album art (Eddie flips the bird and bares his pumpkinesque buttocks, with "Maiden Rule" scrawled in blood across the bulbous cheeks) to the horrific "Charlotte the Harlot," guitarist Murray's misogynist mishap that surfaces on each disc.

However, the band is also an increasingly easy one to defend. In addition to Archives, 2002 delivered Rock in Rio, yet another concert double disc (this one containing strong material from Maiden's startlingly relevant 2000 comeback album Brave New World), as well as the reissue of remastered versions of 14 of the group's records. Each release glistens with more fine metal craftsmanship than a blacksmith convention; for every track that falters, there are three that define everything hard rock should be: heavy, skillfully played, larger-than-life, quick-paced, violent, and fantasy-fiction literate. And if you listen closely during the performances, you'll hear bursts of applause without musical provocation -- "insert explosion here" moments that confirm concertgoers' grandiose tales. Get this set, and spin a few of your own.