Is hipster metal for assholes? Two of our writers discuss

by Michael Gallucci and D.X. Ferris 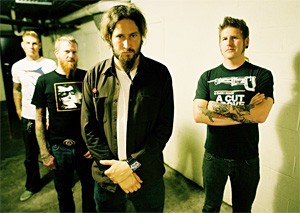 Like a lot of music critics, I don't like metal. It's not that I don't like it, exactly; I just don't get it. Those Cookie Monster vocals growling about ghostly warriors from ancient cities, buried beneath rubble eons ago — all lost on me. And during metal's formative years, the '80s, I was listening to post-punk bands like the Replacements, not Warrant.

But lately, like scores of other music critics, I've been getting into some "hipster-metal bands," so named because guys like us — guys who drool over Arcade Fire and drop Velvet Underground lyrics into everyday conversation — listen to them. Real metal dudes hate people like me. And that certainly includes D.X. Ferris, my co-worker and author of a new book about Slayer's Reign in Blood, which is apparently some sort of classic metal album.

Ferris and I recently squared off over some of hipster metal's biggest bands. Our exchange is below. Seems we reached some common ground. He hasn't called me a "poseur asshole" in days. — Michael Gallucci

Mastodon
Gallucci: Mastodon's breakthrough album, Leviathan, is a concept record based on Moby-Dick. The cover art features a giant whale capsizing a boat. There's actually a song called "I Am Ahab." The Atlanta band followed up Leviathan with Blood Mountain, another concept album — this one about some pretty horrible woods-dwelling creatures. Somehow, the music sounds exactly like those concepts.

Ferris: Even credible music fans make music appreciation an intellectual exercise: English teachers say Moby-Dick is good; Mastodon must be good. You embrace Leviathan based on Mrs. McGinty's recommendation, when you should have checked it out, because "March of the Fire Ants" from the previous album, Remission, ruled. Metal dudes do it too. They figure Leviathan ruled, so Blood Mountain must rule too. But it's pretty turgid.

High on Fire
Gallucci: I actually like parts of their latest album, Death Is This Communion, even though I picked up only a third of what singer Matt Pike is going on about. The cover art — a horned beast holding some skulls — made me wonder: Who falls for this devil shit? But it rocks pretty hard, especially for three guys.

Ferris: First, the guy on the cover is no more the devil than Warrant is metal. Second, once again we see the association effect: Steve Albini recorded High on Fire's previous CD, Blessed Black Wings, one of the most grind-your-face-off albums ever recorded. Albini was in Big Black and recorded Nirvana, so High on Fire must be OK. You're only giving Death Is This Communion partial credit, when, in fact, the album's every bit as solid as Amy Winehouse's Back to Black.

Isis
Gallucci: I like pretentious music. I like when bands stretch their ambitions and the lengths of their songs. That's why I'd rather listen to Angels & Airwaves than Foo Fighters. Isis writes seven-minute tunes called "Firdous e Bareen." I have no idea what their songs are about, but they're built on a sonic landscape that comes pretty close to prog at times. Still, all the tracks tend to sound the same after about 20 minutes/three songs.

Ferris: If you don't like metal, how can any metal you choose to like be good? Isis is typically lumped in with the instru-metal movement, which is a series of overlapping bands that are all indebted or connected to Neurosis, whose true metal cred is tenuous at best. But Isis is not metal, especially its latest album, In the Absence of Truth. It's prog-emo, and vocal songs like "1,000 Shards" are particularly lah-dee-dah. There are no feelings in metal, except murderous rage and assorted anger.

Queens of the Stone Age
Gallucci: QOTSA are the proto-hipster-metal band. Writers who previously spent most of their time finding new ways to gush over the Magnetic Fields were all over this band in the late '90s — presumably because frontman Josh Homme looked like a frat guy (no funky facial hair or visible tats) and had a sense of humor (metal dudes don't). Plus, they play stoner metal, which is descended from Black Sabbath, a group that hipster metal fans used to hate, but now adore.

The Sword
Gallucci: These Austin longhairs also come with the stoner-rock tag. There are tons of sludgy guitar riffs and twin-shredding solos, but singer J.D. Cronise has more in common with the guy who sang in Blue Cheer than a circular-snack-loving Muppet. Still, the Sword's latest album, Gods of the Earth, includes a song about "Fire Lances of the Ancient Hyperzephyrians." I have no idea what that means.

Ferris: See? All this elaborate mythology and not one word about "Hail Satan"? Ancient Hyperzephyrians? You can't just make shit up. True metal bands like Nile draw on 5,000 years of established mythology, pagan and otherwise. And what does the Sword come up with? "Uh, dood — we're, like, the Sword and stuff." It's good rock, but when it comes to metal, it's really the S-word.