It Falls to Pieces 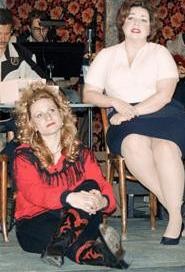 For many who believe the world is a beautiful place, the overpriced paintings of Thomas Kinkade are an abomination. His cozy little cottages, with their gleaming lights shining through a bower of luxuriant trees, are a sugar-frosted parody of reality. Genuine beauty is always a balance between the ideal and the real, not a denial of the latter.

In a similar way, some theatrical presentations about real people fail because they deny the dented and flawed humanity that makes a person's creative genius so extraordinary. Such is the case with Always . . . Patsy Cline, now playing the lagoon stage at Stan Hywet Hall & Gardens. This well-executed production by the Ohio Shakespeare Festival, its one non-Shakespeare work of the summer, is largely blameless. But the script, penned by Ted Swindley, does not approach the quality necessary to stand alongside the work of the Bard.

In 1960, Patsy Cline was a remarkably gifted singer, teetering between pop and country, and able to wrench ungodly emotion from songs that were otherwise less than stellar. In "Crazy," written by Willie Nelson, Cline took the perfunctory stair-step lyric "I'm crazy for trying and crazy for crying/And crazy for loving you," and used her awesome vocal pyrotechnics to turn it into a heartbreaking ode to the torture of love on every plane: physical, metaphysical, and spiritual.

But what everyone heard behind Patsy's singing, behind the signature "catch" in her voice when she dropped or jumped a note, was a depth of experience and hurt that no five-volume autobiography could express. And that is the missing element in Swindley's effort.

The playwright sprays Patsy with a thick, enveloping foam of golly-gee fan spume in the persona of Louise, a big-haired Cline devotee who shares a roof one night with the star and is bedazzled ever after. This untrammeled worshipfulness, even though based on an actual event, does not afford the kind of commentary on the singer that could have lent resonance to Patsy's song stylings -- not to mention her reputation for off-color language and restless sexuality. Instead, Cline is turned into a plaster Opryland saint, perfectly airbrushed and prepared to be cast in plaster in front of a PatsyLand theme park in Branson, Missouri.

It's too bad, because Debra Wagoner, who plays Cline, has many of the attributes of this singer, who was on the national stage for only a couple of years before her death in a plane crash at age 30 in 1963. Suitably chunky and a bit dowdy, she possesses the rock-solid vocal foundation necessary to anchor everything from rockabilly ("It Wasn't God Who Made Honky Tonk Angels") to diggin' country ("I Fall to Pieces') to bubblegum pop ("Stupid Cupid"). And even though her tonal downshifts aren't perfectly smooth (a "you-oo" comes out more like a "you . . . hoo"), she ably conveys the emotional content of Cline's repertoire.

When not singing, though, Swindley's Patsy is wheeled around the stage like a Disney mascot, waving and smiling, but never becoming a rounded, nuanced, and vulnerable individual. We see an almost mute Patsy arrive at a club, where she meets Louise, and then go home with her awestruck fan to cook eggs and ponder life for a couple of seconds. During all this, heart-of-gold trailer trash Louise is doing all the talking, telling us what Patsy is thinking. But adorably down-home as Louise is (as portrayed by Sarah Lyon), we couldn't care less. It's Patsy we've come to learn about -- firsthand, if you please.

Fortunately, there are a couple dozen Patsy Cline songs to divert attention from the barren script, and occasionally there are moments of magic. One is when Wagoner essays a lovely combination of two songs; "If I Could See the World Through the Eyes of a Child" and "Just a Closer Walk (With Thee)." Singing with a profound sense of place and purpose, Wagoner turns the simple phrases of the former tune ("There'd be no trouble and strife/Just a big, happy life/With a bluebird in every tree") into an evocative anthem for any adult who has longed for a less complicated life.

Director Nancy Cates maneuvers her two-person cast around the Stan Hywet stage with dexterity and tries to cadge meaning out of the mundane drivel the playwright has provided, but ultimately the spindly story collapses under Cline's heavyweight aura. Sadly, when Louise announces Patsy's unexpected death in the plane crash, there is little grief to be felt because, Patsy, we hardly knew ye.

For those who loved Patsy Cline, there are memories that can be awakened by some of the songs in this production. But for those who didn't experience the original, her life will remain a mystery after the closing curtain.