It Was Good, Uh-Huh

Better Than Ezra crawls out of the '90s to open a new venue. 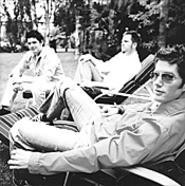 It's been a while since Better Than Ezra had a song on the radio. More than five years, actually. But in the mid-'90s, when the alternative nation was thriving and folks couldn't get enough of grungy guitars, Better Than Ezra was pretty hot. "Good" was all over modern-rock radio. Follow-up songs were pretty successful, too. Leader Kevin Griffin has reorganized his band, which never really went away, and is taking it on a greatest-hits tour of the States in support of Live at House of Blues New Orleans. Not so coincidentally, its stop in Cleveland on Sunday is part of the city's House of Blues opening weekend. "For a band of our size, they make us feel really good about what we do for a living," says Griffin. Expect to hear all the hits, plus some new stuff, says Griffin. "It was fun back then, but we're a busy touring band now." Show time is 6:30 p.m. at House of Blues, 308 Euclid Avenue. Tickets are $22.50 and $25; call 216-241-5555. -- Michael Gallucci

On The Night Before Christmas, Belinda and the Sugar Rum Cherries have ditched their flashy Vegas lounge act to become a fairy godmother ("That's F.G. to you!") and some elves. Their mission: To help two foster kids find their biological parents before the holidays. Written by Cleveland actress Margaret Lynch, the show is an urban mix of song and dance -- complete with Duke Ellington's jazzy arrangement of The Nutcracker Suite (which the Cleveland Jazz Orchestra will play live on Saturday). "I feel there's room for diversity in what the arts community offers for the holidays," explains Michael Medcalf, artistic director for the Cleveland Contemporary Dance Theatre. "And this year, we're turning it up a notch." The Night Before Christmas will be performed at 8 p.m. Friday and Saturday and 3 p.m. Sunday at Tri-C's Metro Campus, 2900 Community College Avenue. Tickets range from $15 to $22, available by calling 216-791-9211. -- Cris Glaser

Get Your God On

Before you start preparing for the Son of God's big birthday bash next month, check out the Messiah during his totally rockin' period in Jesus Christ Superstar. Less bloody than Mel's movie, more tuneful than the music of Christian popsters Caedmon's Call, the stage perennial has a hippie-dippy message that still seems comforting and relevant 32 years later. Superstar rocks the E.J. Thomas Performing Arts Hall (198 Hill Street in Akron) Friday through Sunday. Show times are 8 p.m. Friday, 2 and 8 p.m. Saturday, and 2 and 7:30 p.m. Sunday. Tickets range from $27.50 to $52.50, available by calling 330-972-7570. -- Michael Gallucci