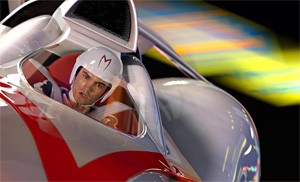 In converting a fondly remembered cartoon series into a prospective franchise, Matrix masters Larry and Andy Wachowski have taken another step toward the total cyborgization of the cinema. Gaudier than a Hindu temple roof, louder than a Las Vegas night, Speed Racer is a cathedral of glitz. The movie projects a Candy Land topography of lava-lamp skies and Hello Kitty clouds — part Middle Earth, part mental breakdown — using a beyond-Bollywood color scheme wherein telephones are blood-orange, jet planes electric fuchsia, and ultra-turquoise is the new black.

But this carousel, which clocks in at a leisurely 135 minutes, is more fun to describe than to ride. Blithely nonlinear for its first half-hour, Speed Racer has a narrative at once simple-minded and senseless, albeit touchingly faithful to Tatsuo Yoshida's original cartoons. Here, too, the hero (Emile Hirsch) — child of the auto-inventor Pops Racer (John Goodman, man-mountain of goodwill) and Mom Racer (self-Stepfordized Susan Sarandon) — is born to drive the family Mach 5, particularly once older brother Rex is seemingly vaporized in a wreck. And drive Speed does — if not quite as well as the mysterious Racer X (Matthew Fox).

Generically speaking, Speed Racer will never be confused with a no-frills dynamo like Howard Hawks' The Crowd Roars. For all the excited color commentary ("Speed Racer is driving straight up a cliff face!!!"), the races lack drama. Each spectacle is an autonomous, enjoyably lurid tinsel-confetti blur, with crack-ups as convoluted as they are inconsequential. As choreographed as the action is, it lacks only printed sound effects — Wham! Blam! Pow! — to sign post the Wachowskis' facetiousness.

After the relative failures of The Matrix Reloaded and The Matrix Revolutions, and the widespread disapproval inspired by their tastelessly anarcho-terrorist V for Vendetta, the brothers have opted for family-friendly fluff. In place of irony, there's a sprinkling of camp sentimentality. Speed is abetted by plucky girlfriend Trixie (Christina Ricci), who is even more of a porcelain doll than Mom. And, as back in the day, the clan includes a tubby little brother (Paulie Litt) with a bratty pet chimp.

Like The Matrix, Speed Racer gives the not-unrealistic impression of taking place inside a computer. But love, hate, or ignore it, The Matrix proposed a social mythology. Speed Racer is simply a mishmash that intermittently parodies the earlier film's pretensions: His path plotted by a mysterious cabal, Speed Racer could be the One. Indeed, in the grand first-installment climax, messianic frenzy merges with market research as the young racer's "upset" victory bids to change not only the face of high-stakes race-car driving, but the nature of reality itself: "It's a whole new world!" This hopeful self-promotion is especially ridiculous in that Speed Racer — like The Matrix and the plot-heavy V for Vendetta — ostentatiously traffics in left-wing allegory.

The villain (Roger Allam, V for Vendetta's fascist talk-show host) is a slavering tycoon, while Speed Racer is, as his mother tells him, an artist. In the movie, racing is itself a racket. Multinationals sponsor drivers, fix races, and use the sport to drive up the market price of their stock — just as the Wachowski brothers might once have regarded Hollywood. Ideologically anti-corporate, their previous productions aspired to be something more than mindless sensation; Speed Racer is thrilled to be less. It's the delusions minus the grandeur.