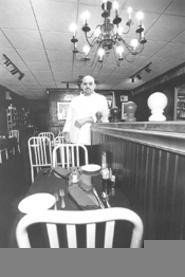 There's no way around it, so I'm just going to come right out and say it: The kitchen at Curcio's overcooked the pasta. Lasagna noodles? Limp. Spaghetti carbonara? Floppy. Penne in an absolutely killer plum tomato sauce, enriched with a soupçon of cream? Flaccid.

But that said, in most other regards, this little neighborhood Italian restaurant is a peach. Homemade sauces are robust and flavorful, meats are mostly tender and attentively prepared, breads are freshly baked, and desserts include several satisfying selections. The dining room also has a full bar and a surprisingly solid international wine list, with an emphasis on fairly priced Italian and Californian reds, mostly set at less than $30 a bottle.

The restaurant, which debuted a little more than a year ago, is a first for chef-owners Tony and Chris Esquivel, although the brothers are old hands at Italian cookery. Prior to opening Curcio's, Tony served as chef at Bocelli's on Shaker Square until its closing, and Chris was executive chef at Corleone's in Parma. Even better, marinara apparently runs in their veins: The brothers' grandmother was Sicilian, and the restaurant is named in her honor. The former Amici's was given a thorough facelift before its reopening and is now a playfully dramatic little spot, with black stucco walls, dark wood trim, and a gallery of oversized European advertising posters in bright primary colors. The same cheerful shades show up on the ball finials that top a series of room dividers and in the fabric swags that outline an interior window. Well-spaced tables are draped in black linens and accented with maroon napkins; white-enameled chairs make a bright counterpoint.

The brothers Esquivel have assembled a large dinner menu of Italian standards, including chicken, veal, seafood, beef, and pasta dishes. Entr´e prices range from around $10 for a simple plate of spaghetti and meatballs to $21 for a 12-ounce veal chop. Dinners come with a generous house salad of romaine, black olives, and garbanzo beans, lightly dressed in a subtly sweet honey-balsamic vinaigrette; slices of warm bread; and butter spiked with garlic and black olives.

If our nostrils hadn't already alerted us, that robust house-blended butter would have been the first tip-off that the brothers are fond of garlic. Big slices of the fragrant clove showed up in a bowl of hearty pasta e fagioli: a zesty tomato broth brimming with penne, cannellini beans, onion, and oregano, under a drift of shredded Parmesan cheese. And fresh garlic gave a notably nutty richness to the house marinara, where we found it balanced with just a touch of natural sweetness.

Besides the soup, the menu offers more than a dozen other starters and specialty salads. If the decision-making process weighs too heavily on your shoulders, you can choose to sample seven of the freshly made appetizers on the Hot Antipasti Platter for Two. Here, slabs of crusty fried mozzarella, served with a spoonful of Marsala-scented saut´ed mushrooms, competed for our attention with lightly breaded jumbo shrimp and bite-sized bits of artichoke heart in a mouthwatering lemon-butter "Curcio" sauce. Then there was the pile of fat saut´ed mussels . . . the tasty clams on the half-shell, mounded with bread crumbs and chopped onion, prosciutto, olives, red pepper, and Romano cheese . . . a breaded and fried roll of sliced eggplant, wrapped around mozzarella, tomato, prosciutto, and ricotta . . . and a pile of crunchy fried calamari, just right for brushing through more of that luscious marinara.

Among the main events, Veal Saltimbocca was a champ. The word "saltimbocca" means "jump into the mouth," which was precisely what this match-up of thinly sliced and breaded veal, prosciutto, and mozzarella did. While Curcio's version was layered, not rolled and sliced as is traditional, its interplay of textures and flavors was without flaw. The kitchen dished out a little extra oomph by presenting the veal on a satiny bed of emerald-green escarole and covering it with a blanket of flavorful saut´ed mushrooms. On the whole, it made up handsomely for the one disappointing dish we had here: a lackluster Veal Marsala sampled during a lunchtime visit, with a soggy crust, not-quite-tender meat, and a niggling dab of Marsala wine reduction.

The kitchen also did an impressive job with the thick Filet Curcio: a nine-ounce tenderloin topped with a bit of roughly diced shrimp and scallops in a savory vermouth cream sauce, and cooked as ordered to a juicy medium-rare. With its smoky aroma and just a hint of sweetness, the filet was every bit as tasty as it was tender. Our only quibble was that the steak was settled all by its lonesome in the middle of a very large plate: We couldn't help but think that a touch of escarole or a few florets of broccoli would have jazzed up the presentation.

Meals include a side of pasta marinara, but we chose to pay an extra $3 to substitute something sexier. Our first choice, spaghetti carbonara, was good, with a substantial but not overwhelming made-to-order Alfredo sauce flecked with prosciutto and bits of onion. But our second choice, Penne Piselli alla Genovese -- penne, sweet peas, prosciutto, and tender, well-trimmed artichoke hearts in a creamy plum tomato sauce -- had a simply outstanding flavor. It's frustrating to consider how ravishing both these dishes would have been, if only the pasta had been al dente. But limp noodles or not, a massive portion of Curcio's meat-free lasagna was a pleasure, with thick layers of ricotta, Romano, and mozzarella cheese providing plenty of body.

Although the restaurant is open for lunch, with a smaller and less-expensive menu, business seemed pretty slow on a Wednesday afternoon. Not so on a Thursday evening, when the dining room welcomed a steady stream of happy diners. Their good mood was due, at least in part, to the pleasant service. Between the attentions of the servers and the hostess, no one seemed to want for anything. It was also refreshing to find staffers who were frankly enthusiastic about the food they were serving and who willingly made suggestions and recommendations to ensure their customers' satisfaction.

That is, after all, how we came to find out about the Opera Torte: layers of moist, delicate chocolate cake interspersed with chocolate ganache and thick striations of achingly fresh, not-too-sweet mocha cream filling that melted on the tongue like butter. The cake, along with a handful of other items on the dessert tray, was from local French bakery Gateau Royal, and our server was correct when she assured us it was more than a cut above average. As an alternative, we can also recommend the freshly stuffed cannoli, with their crisp shells and sturdy filling of sweetened ricotta and chocolate chips, washed down with a mug of cappuccino.

As for the issue of the overdone pasta, Tony Esquivel swears it was a fluke. A distributor briefly ran out of the restaurant's usual brand of pasta and took the cooks by surprise by substituting one with a shorter cooking time. By now, everything should be back to normal, Esquivel promises, and guests can look forward to suitably al dente dishes. Grandma Curcio would undoubtedly be pleased.