It's a Black Thing

The teacher, not the teaching, makes this School of Rock. 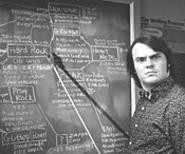 Director Richard Linklater's School of Rock imagines, sort of, what might have become of Barry, the voluble rock snob, the morning after his grand finale in Stephen Frears's adaptation of Nick Hornby's High Fidelity -- after his Marvin Gaye impersonation had faded and been forgotten in the daylight hours, after he quit his gig at the record store to pursue his rock-and-roll fantasy, after he moved into Barrytown and realized it was a rundown neighborhood populated by wannabes and failures. Barry, as embodied and then some by the whirlwind Jack Black, dreamed of the arena, but would never have made it past the club; he was a small-time contender, but a pretender nonetheless -- a hapless hopeful. Still, Barry would never have admitted defeat, never have gone back to work for John Cusack, and never have stopped believing he'd be somebody -- even when he looked into the mirror and saw a nobody in need of a shave and a regular paycheck. His would have become a life of endless cutting contests, of crashing on friends' couches, of doing nothing all day while waiting for somewhere to rock all night.

That's just the life School of Rock's Dewey Finn leads, and just barely. Dewey, played by Black, is still chasing Barry's dream: He's the stage-diving, solo-taking guitarist in a hair-metal band that thinks Dewey an embarrassment, a no-talent who'll keep the band from winning a local battle of the bands -- a real punch in Dewey's ample gut, considering the band resembles a third-rate Poison-tribute act. Disgraced, he takes to sleeping all day on the couch of his pal, nebbishy Ned (Mike White, who also wrote the screenplay) and Ned's girlfriend, Patty (Sarah Silverman), who demand that he get up, get a job, or get moving. Dewey says he'll just temp, the way Ned does; Ned, a substitute teacher, says Dewey "wouldn't last a day." Ms. Foreshadowing, meet Mr. Plot Point.

Dewey, assuming Ned's identity, ends up teaching at a hoity-toity private school run by the uptight Principal Mullins (Joan Cusack, not nearly the sympathetic boss her brother was). At first, he brushes off the kids; Dewey's idea of learnin' is telling the kids, a precocious multiethnic lot, that they're doomed to be failures. Then he overhears them jamming in music class and figures he can prod the prodigies into joining his group for the battle of the bands, which involves deceiving the principal and taking the kids out of school without permission -- very sketchy stuff, all made to look endearing. From there, School of Rock turns into Mr. Holland's Opus with an AC/DC-Led Zep soundtrack, Dead Rocker's Society, and The Emperor's Club (if by "Emperor," you're talking about the Norwegian Viking-metal band of the late '90s). Carpe diem in this case translates into "Rock on, little dudes."

After his turgid think pieces Waking Life and Tape, Linklater seems delighted to romp in the mainstream again with a rock soundtrack turned up to 11. The Austin-based filmmaker, shooting entirely in Manhattan, hasn't made anything so enjoyable since Dazed and Confused, a bong hit of a movie that managed to be nostalgic without inhaling noxious, wistful fumes. School of Rock, populated by bright-shiny faces and given a Revenge of the Nerds happy ending, is light and meaningless, but never worthless. It aspires merely to be a good time and is just that, nothing more -- a grin-worthy buzz that wears off in the parking lot.

Chuck & Buck and The Good Girl writer White, who likes revealing the hidden kinks and naughty secrets behind the mundane facade of the everyday, isn't interested this time in the dark side; he, too, is all light and happiness. Otherwise, he would have ended School of Rock with Dewey in the back of a police car, headed for a long stint in the slammer after he's found out by outraged parents, aghast at his revelation that he's "touched your kids." (In the good way, of course.) Instead, we're given hugs and kisses all around, none of them creepy, even though the teacher was just an impostor looking for a paycheck.

Of course, the movie would be less than nothing without Black, finally allowed to charge ahead without a director acting like his movie set's a china shop. School of Rock would be saccharine without him, a feel-good that tastes awful. Black, the tenacious B in folk-metal-art-rock cutups Tenacious D, plays himself -- or certainly to the expectations of those enamored of his convulsive outbursts and eyebrow spasms. His is a curriculum of metal moves and guitar-hero histrionics, taught to kids who were hired because they could actually play. Dewey's the sub you pray for but are scared of when he actually shows up, his eyes wild and mouth screwed into an ex-con's grin. Without Black, School of Rock wouldn't pass.