A Slipping-Down Life takes a beating going from book to film. 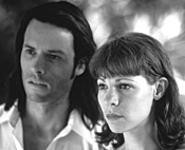 Those people who live in small towns, they're not like you and me. So naive, so innocent. And adorably quirky. Why, they've got so many lovable quirks, you just wanna run up and hug 'em. Or, if you're a filmmaker, perhaps you can make a movie about these simple folk, so that you can adore them from a distance while feeling secure that you're smarter than they are and don't have to live so far away from civilization.

That's the impression one gets from A Slipping-Down Life, anyway. The feature directorial debut of Sopranos actress Toni Kalem, it's an adaptation of a 1969 novel by writer Anne Tyler (The Accidental Tourist), and it's been in the can for some five years due to legal difficulties. Now in theaters thanks to Lions Gate, it hasn't aged well. Then again, it wasn't adapted very well either.

Evie (Lili Taylor) is a slightly dysfunctional woman still living with her father and working at a rundown amusement park. When she hears an up-and-coming local musician give a radio interview in weird, non sequitur fashion, she finds herself emotionally moved and goes to a rock show to seek him out. The man in question is Drumstrings Casey (Guy Pearce, post-L.A. Confidential, pre-Memento), a sort of ersatz Jim Morrison type with a penchant for suddenly stopping his songs (written for the movie by the likes of Robyn Hitchcock and Ron Sexsmith) and "talking out," which is to say uttering pretentious spoken-word nonsense that might seem profound to someone who's never heard poetry before. Like, say, Evie.

Evie develops a huge crush over the course of two shows and decides to get Drumstrings' attention by carving his last name into her forehead with broken glass. It works, and gets him some free publicity, too. She suggests that she should appear at every show as a sort of marketing gimmick, which seems to help his musical fortunes. Then without much warning, Drumstrings proposes marriage to Evie. The film's second half deals with the aftermath of that decision.

The setup of socially stunted and slightly obsessive girl meeting pretentious brooding hunk is quite similar to another recent Lions Gate pickup, Lucky McKee's May. Unlike May, however, it's not clear just why these characters are so emotionally immature. Are we to assume that Evie, played by thirtysomething Taylor looking her best, has grown up in a small North Carolina town without ever experiencing any kind of romance. That Drumstrings' act wouldn't just seem incredibly passé to almost everyone?

The problem is in the transition from page to screen. The characters in the book are teenagers, which explains the whole impetuous first-love thing as well as the tendency to do dramatic stuff like self-mutilation and bad poetry readings. When acted out by performers in their mid-30s, on the other hand, such behavior makes less sense -- and demands some sort of explanation that's never given.