It's What They Do

Don Austin sweats out vintage hardcore with passion in place of pretense. 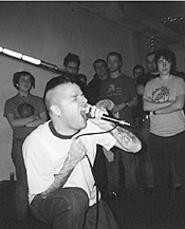 Don Austin is so old-school, it only releases EPs on 7-inch vinyl.

"When I was growing up, that's what it was," says Larry Gargus, singer for the Akron hardcore quintet. "Everyone released 45s and traded tapes. That's how people found out about bands. Even Metallica got known through tape-trading. That's what hardcore was all about."

Putting the hurt on the first of a series of Pabst Blue Ribbon pounders, Gargus sits in a booth at Annabell's, on the outskirts of suburban Akron. Magnificent in its grunge, the dimly lit mead hall is all earth tones, random blotches of brown paint, and exposed beams. Tonight's action -- aside from the $2.99 steaks -- is provided by four hard-and-heavy Akron bands with little in common but attitude: avant-garde stoner rock, then grindcore, then thrash.

And then Don Austin.

Gargus's band doesn't even try to record music that will sell. Most of its originals come in around the one-minute mark, some 45 seconds of breakneck downstroking and bruising percussion, spiraling out of control but ending before there's time to wreck. Once it's down on vinyl, the band usually doesn't even bother asking people to pay for it. More records are given away than sold.

"I just don't care that much," says lead guitarist Clint Bott. "It's less a pain in the ass to give 'em away." If one person in the group should care about sales, it's Bott. He's the CEO of Rubber City Records, a spartan Akron label that doesn't even have a website. When Rubber City started distributing records that had been gathering mold in the basement of Bizarros singer and Clone Records head honcho Nick Nicholis, Don Austin forged its link to a long legacy of unrecognized Akron-area bands.

Tonight, Bott's an unlikely punk impresario, his blonde hair cropped close and slicked back like David Bowie's during one of his less flashy phases, his vintage ginger vest covered by a tweed sport coat. For his part, Gargus is a model hardcore frontman: A black-and-white flannel covers a tattoo that runs down his forearm; he seems two feet shorter when he's not charging a crowd, holding a microphone like a roll of quarters.

If Gargus and company look and sound like vintage punks, it's because they earned their stripes in the hardcore underground years ago. Gargus discovered the scene during the end of its mid-'80s golden age. He started going to shows in 1988, when all his favorite bands were breaking up and falling off. While Clevocore was exploding from '88 to the early '90s, Gargus played in the Kent band Splinter with Joe Macchiarole, Don Austin's original drummer.

"I think part of the problem with the Cleveland bands is that they were so influential that everybody wanted to ape them," says Gargus. "I'd get to practice, and my guitarist was writing a riff that was an Integrity riff, all metal. We had our own thing going on down here. Kids in Cleveland thought we were a joke."

Splinter lasted from '89 to '94. From '96 to '98, Gargus fronted Unholy Three with Bott, who played three-chord hardcore riffs over Macchiarole's complex drumming and jazz time signatures. Don Austin came together in 1998. By the release of "Akron" -- an EP recorded in 2001, but not issued until 2003 -- the band's lineup had jelled, featuring bassist Mike Stangelo and guitarists Bott and Bott's brother Chris, the former roommate of Black Keys drummer Patrick Carney. (Sean Spindler eventually replaced Macchiarole behind the kit.) Without a single reference to music made after 1985, the band is completely removed from the metal-mad neo-hardcore movement.

"There's nothing wrong with metal," says Gargus. "But when hardcore kids started doing the metal well, the music became metal. 'Metalcore' is a marketing term, like 'emo.' Emo is people falling on stage and crying for no reason. It's just a bunch of rich kids trying to get laid."

The Akron scene's anything-goes attitude recalls early punk, in the days before unbridled creativity congealed into a panoply of orthodoxies. Only in Northeast Ohio's most progressive and creative scene is Don Austin free to play hardcore that's so atavistic, it's visionary.

"Truth be known, all the best bands are from the Midwest," Gargus says. "Punk was invented in the Midwest. The Stooges, the Dead Boys, Die Kreuzen, the Crucifucks, Negative Approach. The Midwest has always had more original, better, groundbreaking bands. I think people in the Midwest have a more authentic, real approach. That's why when the Dead Boys went to New York, people were blown away."

Don Austin hasn't been that far. They've toured, played Chicago a few times, appeared on the barely distributed Devo tribute LP Not Necessarily Beautiful but Mutated, released an EP on New York's Gloom Records, and attracted some attention from bigger labels. But the band just wasn't into it.

"The fact of the matter is, I've got a kid now," says Gargus. "Clint didn't really want to tour. We couldn't do what the label wanted us to do, so we decided to keep going on, but doing things for us. I'm not a road dog. I don't want to be away from home. It was never a career option."

Working for no money, issuing music in an obsolete medium, playing in a scene that's always been under the radar and probably always will be, developing a name that 10 years from now is likely to mean something to fewer than a hundred people -- for the members of Don Austin, the reward is singular.

"It's a good time," Gargus says. "We're in it for reasons other than to get famous or popular. I'm arrogant enough to say we're a good band. But I know we have a limited appeal. It's an outlet. It's what we do. I've seen too many guys start bands in their teens, then quit by the time they're 25 and have a career. Why quit something you love? I'm not gonna give you that 7 Seconds' 'young till we die' bullshit line. But it's what I do."