Though the service could use some refinement. 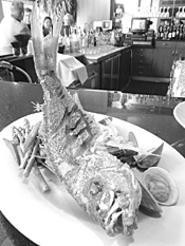 Long after the taste of filet mignon has faded and the silvery bubbles of Dom Perignon have become a pleasant blur, what we tend to remember about an upscale restaurant is the service: the way we were pampered (or not) by the staff, and how special (or unappreciated) we felt by the time we said goodnight. After all, we can score a steak and a jug of wine just about anywhere, but when we decide to pay top dollar, we want some service "bang" for all those bucks.

This isn't to suggest that anyone was hostile or intentionally derelict in his or her duties during our recent visits to Akron's Jacob Good Downtown. Owner and hospitality-industry veteran Tracy Roadarmel is way too savvy to countenance frank disrespect. But for a guy with such an impressive track record (including management positions at top restaurants in Cleveland, San Francisco, and St. Maarten, as well as ownership of what has become the star of the Canton culinary scene, Peter Shear's Downtown), Roadarmel seems to be having a surprisingly tough time shaping up his Akron personnel.

The handsomely decorated restaurant on the ground floor of the circa-1870 Hermes Building opened last December, in time for the winter holidays, and according to staffers, the spot has been doing a bang-up lunch-and-dinner business ever since. But instead of the expected crew of tried-and-true professionals, we found employees who seemed well intentioned but clueless; who repeatedly schlepped through the beautifully appointed dining room with trash cans, for instance; who forgot to put a garnish in an $8 martini; and who served the entrées before remembering to fetch the appetizers.

Even with dinner reservations, we encountered a 15-minute wait for a table. Although there is a cloakroom, no one offered to check our coats. And when our table finally became available, our hostess seemed perfectly content to let us carry our own cocktails through the crowded dining room, rather than grab a tray and transport them herself.

Considering that Jacob Good's dinner menu is among the priciest in the region, such antics seem particularly out of place. After all, it's not as if guests aren't paying a premium for a first-rate night on the town. Among the apps, for instance, there are $14 crab cakes, $12 shrimp cocktails, and caviar-and-champagne tastings that run from around $84 (for one ounce of Beluga and a bottle of Domaine Chandon Brut) to $278 (for one ounce of Sevruga and a bottle of 1995 Dom Perignon). Among the 14 à la carte entrées, 10 check in at $25 or more -- including half a dozen priced at $30 or higher. And while the international wine list is indisputably distinguished -- filled with such respected names as Opus One, Chateau Clinet, and Quintessa --wallet-watching oenophiles will find next to nothing for less than $30.

(The weekday lunch menu is more moderately priced, however, with soups and salads in the $4 to $10 range; burgers, panini, and assorted sandwiches priced at $6 to $8; and a handful of entrées that hover around the $12 mark.)

But if the service doesn't live up to our price-driven expectations, the good news is that the kitchen, under the direction of executive chef Michael Meffe (an alum of Johnny's Bistro and the Inn at Turner's Mill) and sous chef David Ash (the last chef at the former Kosta's), generally sizzles -- especially at dinner, when sophisticated dishes and chic ingredients draw freely, and often creatively, from American, Continental, and Asian flavor lexicons.

Fish and seafood are among the menu's main focuses and, as both apps and entrées, often come in for an Asian touch. That luscious shrimp cocktail, for instance -- four jumbo Black Tiger shrimp resting on a bed of baby greens -- gets an East-meets-West wallop from wasabi-piqued cocktail sauce; an entrée of nori-wrapped ahi tuna comes with stirfried veggies and wasabi-soy beurre blanc. Eleven different styles of sushi and sashimi are also available, prettily presented with chopsticks on a white rectangular platter; both inside-out California rolls and spicy tuna rolls were well prepared by the resident Korean sushi chef and full of freshness.

The menu's other focus is beef, in the all-American form of thick, juicy steaks, ranging from an 8-ounce filet to a 22-ounce long-bone rib steak, each finished with a choice of one of six sauces, including Béarnaise, Bordelaise, or Maytag-vodka cream. While we secretly coveted a 12-ounce Kobe beefsteak, even expense-account types like us found it hard to justify the $39 splurge. Instead, we "settled" for the giant Black Angus rib steak, a richly marbled, two-inch-thick beauty, perfectly grilled to a buttery medium rare; with a splash of the well-balanced Jacob Good steak sauce and a side of vaporous caramelized-shallot mashed potatoes, the rib steak proved to be one of the most simply delicious meals in recent memory.

Among the starters, the standout was the pan-seared lump-crab cakes, accented by finely diced bell pepper and onion, their wholesome sweetness entirely unadulterated by bread crumbs, fillers, or starches. Three chewy half-moons of candy-like preserved lemon and drizzles of blended goat cheese and lemon-honey-thyme aïoli provided a uniquely flavorful counterpoint; although the price was high, the portion was ample enough to share.

While it might seem that putting together a good-tasting salad is a culinary no-brainer, any frequent restaurant-goer can vouch for the fact that that simply isn't the case. Limp greens, boring or overbearing dressings, and stingily applied goodies such as nuts, fruits, or cheeses routinely ruin the pleasures of a salad for many of us. So when we say that Jacob Good's salads rock, we ain't just talkin' jive. Every element of the Roasted Asian Pear Salad, for instance -- delicate greens, warm sliced pear, candied walnuts, sweet-tart dried cherries, and a drizzle of port-and-pear syrup -- lent distinctive personality to the whole, and the subtle, understated blue-cheese dressing was just what was called for to bring all the flavors into sync. In similar fashion, the Warm Goat Cheese Salad, a tempting mélange of baby greens, sliced strawberries, and toasted sunflower seeds, tossed with an out-of-the-ordinary maple-balsamic vinaigrette and topped with a generous chunk of mellow herb-infused chèvre, was proof that simple ingredients, thoughtfully prepared and assembled, can construct a dish of deeply satisfying flavors.

Too bad, though, that the kitchen didn't remember that principle when it came to some of the more assertively Asian dishes in its repertoire -- a territory where it sometimes lost its way. For instance, a $14 luncheon special of orange-duck teriyaki was a disappointment, its stir-fried veggies, two slender strips of duck tenderloin, and sticky rice smothered beneath a overbearingly sweet-and-salty orange sauce that annihilated all nuances. Likewise, a dinner entrée of dryish tempura-battered Thai snapper, settled on a mound of cool sticky rice and overcooked stir-fried veggies, was improved not a whit by a thick ribbon of jelly-sweet apricot purée; taken as a whole, the composition just never caught fire.

While the menu of housemade desserts is a mouthwatering read, filled with such rarities as fig strudel and chocolate-fried pears, the three items we sampled were merely average. A shortbread-style tart shell, filled with banana pastry cream and sided by split lengths of pan-seared banana in Bacardi rum syrup, was toothachingly sweet; a scoop of Woo City chocolate ice cream on the side (the kitchen reportedly having run out of the intended vanilla) made a clumsy go-with. Fresh-from-the-oven molten chocolate cake had a delicate texture and tasted predictably rich; this time, however, the accompanying scoop of chocolate ice cream seemed like flat-out overkill. And finally, a simple ending of mixed fresh berries, topped with a spoonful of tart crème fraîche, was refreshing and relatively healthful, but a few drops of Grand Marnier, a dusting of sugar, or a splash of balsamic syrup could have made it special.

Yet whatever its current growing pains, it seems clear there is a fine restaurant lurking at the core of Jacob Good. After all, the retro-chic interior is posh yet comfortable, the kitchen is full of talent, and Roadarmel has a demonstrated passion for excellence. So if the service staff is still rough, and policies and procedures (like ones prohibiting the transport of trash through the dining room) remain to be ironed out, Roadarmel is just the man to do it. We're betting that when he gets those issues under control, Jacob Good will be more than good enough.