At Lorain Correctional, sexual harassment is in the eye of the beholder. 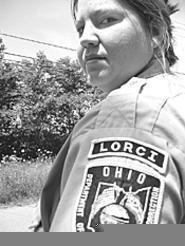 Six years ago, Joyce Bender, a moon-faced mother of two young boys, was working an assembly line, wiring welding equipment. Layoffs always loomed. Then a cousin told her about the good pay and benefits to be had as a guard at Lorain Correctional. Bender took the job, but soon after realized there were unwanted auxiliary benefits: repeated sexual advances.

"It was like I was some type of fresh meat, and so many of the males and supervisors prey on us to see who will get their first turn," she says. "To me, it's like living inside a whorehouse, and everyone takes their turn if you allow them to."

One man was more persistent than most. Captain Darryn Joyce is black, and Bender's white; this provided the subtext for his crude advances, she says. He would say things like "I want to know what it's like to date a white woman" and "You should try a black man, because you don't know what you're missing." She repeatedly shot him down, but he wouldn't take no for an answer.

The women filed complaints, and the prison launched an investigation. But Warden Bennie Kelly did little to inspire faith that he was taking the allegations seriously. Fearful of retaliation, the women asked Kelly to move Joyce to a different shift, so that he wouldn't be supervising them. Kelly refused. "I just didn't think that was a good decision, to move someone without finding out if this was credible," Kelly explains.

It wasn't the first time Kelly took a soft view of sexual harassment claims. Before arriving in Lorain last year, he headed Northeast Pre-Release in downtown Cleveland, where there were numerous complaints of guards molesting prisoners ["Authority Problem," March 12, 2003]. Later, the man charged with investigating abuse was himself accused of harassing female employees, including rubbing his crotch against one woman's behind ["Fox in the Jailhouse?" August 6, 2003]. Kelly claimed it was all just a misunderstanding; the women had taken some good-natured joking the wrong way. He let the investigator off with a reprimand.

When the inquiry on Joyce began, Kelly was clearly skeptical. He notes that Bender and Benner are "best of friends." They claimed the harassment went on for years, yet didn't complain until Benner disagreed with a decision Joyce made. And they provided little documentation.

"There was no information to support sexual harassment," Kelly says.

The inquiry did reveal that Joyce had called Bender at home several times to discuss personal matters, which "allowed the door to be opened" to the accusations, according to Kelly. In the end, Joyce was scolded for poor judgment and given a five-day suspension.

But don't accuse Kelly of taking the claims lightly. "I'm offended by that," he says, anger flashing across his face. "Absolutely, we take it seriously." He points to Joyce's suspension as exemplary of the prison's "zero-tolerance" policy. "Suspending Darryn Joyce for five days sends a very clear message that these allegations will be looked into."

Looked into, maybe, but not thoroughly. Otherwise, Kelly would have known that Joyce was accused of identical behavior -- right down to the same boorish pickup lines -- 10 years ago.

In 1994, guard Diane Struckoff complained that Joyce, then a lieutenant, made "several inappropriate advances" toward her. He told her she had "nice long legs and a nice butt," she wrote, and asked her, "Do you have any problems dating black guys?"

"I have politely refused all of his advances, but unfortunately they are continuing," she asserted.

"I wasn't even done with my training from the academy when he started harassing me," she says today. "He'd tell me how nice my eyes were, how beautiful I was, how he's never been with a white woman and all he wants is to be with a white woman, how he wants to come to my house. On and on."

Nothing ever came of her complaint, she says. "They just pretty much brushed it all under the rug, because he was a supervisor."

Another woman, who asked that her name not be used for fear of repercussions, also accuses Joyce of harassment a decade ago. She says Joyce told her, "If you lose weight, I'll ask you out."

Both Struckoff and the other woman were interviewed in February as part of the investigation into Bender and Benner's allegations. Yet Kelly claims to have no knowledge of their complaints. "Right now, I'm aware of two people, and we investigated those incidents," he says.

By its nature, sexual harassment is notoriously hard to prove. It's often a he said/she said dispute. And one person's harmless banter can be another's harassment. But when four women make similar complaints, it's a fair signal that someone's crossing the line, says Jillian Davis, a lawyer representing Benner and Bender.

"This guy has such a history of this kind of behavior, and it's not been brought to light. You would think that someone would minimally take him aside and say, 'You need to do some sensitivity training. This is not how we behave with ladies.' And nobody did that. This has been allowed to go on."

Which suggests that when it comes to sexual harassment, Lorain Correctional may require some rehabilitation of its own.