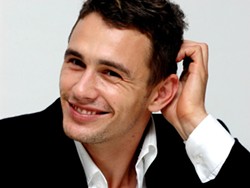 “You don’t like art? You play video games? Guess what, buddy? You like art. You ever been to Subway? You order a sandwich? Someone put that together for you, dude. That’s art. Let me lay this on you, Jay. Your momma’s pussy was the canvas; your dad’s dick was the paint brush. BOOM. You’re the art.” – James Franco playing James Franco in This is the End (2013)

James Franco is one of the most polarizing figures in the Contemporary Art world. Some consider him a “Renaissance Man;” others condemn him as a “half-assed” hack or worse. It seems that very few people are on the fence; you either love him or you hate him. Actually, that sounds like a lot of great artists.

[jump] So, why is James Franco having an art exhibition in Cleveland? You may not know this, but James actually has family roots in Cleveland.

His maternal grandparents, Dan and Mitzie Verne, founded the Verne Collection: A Gallery of Japanese Prints and Paintings on Murray Hill in Little Italy in the mid 1950s, after living in Japan for two years. Now retired, the couple has passed the gallery down to their son, Michael (James and Tom’s uncle), who now serves as President of the Verne Collection.

The Vernes and their grandsons have always been close, despite growing up thousands of miles away in Palo Alto, CA. You may have seen Mitzie Verne at the Academy Awards the year James co-hosted. She was sitting next to James’ youngest brother Dave, who is becoming quite the accomplished actor himself (Neighbors, Scrubs, 21 Jump Street). James is the oldest son of the Vernes’ eldest daughter, Betsy, and her husband, Douglas. James has two brothers – Tom and Dave.

James Franco is a writer, painter, filmmaker, but he is best known as an actor (Milk, Spider-Man, Pineapple Express, Spring Breakers, The Interview). He fell in love with painting as an outlet in high school, and he’s actually been painting longer than he’s been acting. As a teenager, he attended after-school programs at the California State Summer School for the Arts. He studied at University of California (Los Angeles) before earning an MFA in English from Columbia University in New York City in 2010, and has studied (and taught) at many universities including Yale and the well respected Rhode Island School of Design.

“My art work is a reflection of living within the Firehouse Art Collective experience, working with all sorts of artists every day, solving puzzles big and small to perfect the building blocks of creative making,” explains Tom Franco. “When I am spending time in my studio, I try to document that joy that flashes before me as I play and envision objects, people and animals that I love."

He continues, "This year I have focused my art work on an inspiration of community in full swing, vibrant, joyous celebration. I really get a kick out of seeing other groups collaborating in an artistic process, where there is no doubt they have reached their goal!”

The Verne Collection is open Tuesdays through Saturdays from 11 a.m. to 5 p.m. or by appointment. The exhibition remains on view through Saturday, Aug. 8. The show and related events are free and open to the public.