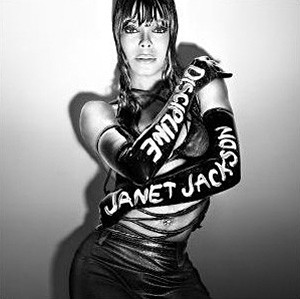 So retro it's alternative, Discipline is a busy, padded album about control and surrender. Like many of Janet Jackson's other CDs, it's awash with drum machines, big, synthesized beats, and cooing choruses on steroids. Jackson's voice, as usual, isn't distinctive. But armed with production help from Jermaine Dupri, Rodney Jerkins, and Ne-Yo, she turns in a professional if unexciting record. The between-song patter will drive you nuts — her handlers apparently told her faking party scenes in these strained interludes would be cool — but turns by guitarist Ernie Isley and booty-shaker Missy Elliott provide occasional style and humor. Repetition capsizes "Rollercoaster" (ever think of love that way before? Originality still hasn't visited Jackson), "Rock With U," and "What's Ur Name," but "2Nite" is sexy and dramatic, "Greatest X" has actual progressions, and "Can't B Good," vapid lyrics aside, has a groove. Expectations may still dog Jackson nearly 20 years after she peaked with Rhythm Nation, but she seems content to release this sort of album — counting on naughty graphics, her buff body, and well-worn rhythmic tropes to appease whatever audience she has left.