The former Dead Kennedys frontman spits venom like Lenny Bruce, but he's not about to OD like him. 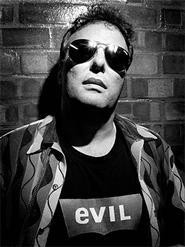 They say there's always room for Jello, don't they? Well, with Bush's popularity now in the shitter, it's as good a time as any to check in with Jello Biafra, the hardcore-singing pundit whose political criticism stuffs fireworks up the cheeks of liberals and conservatives alike.

After answering a magazine ad in 1978, Biafra became the Dead Kennedys' frontman and lyricist. Blistering sarcasm and blazing punk guitars made the DKs popular around the Bay Area, and soon the band had founded its own label, Alternative Tentacles. With the national audience that followed, there also came a wider forum for Biafra's scathingly funny, fat mouth. And when the Dead Kennedys broke up in 1986, Biafra simply channeled his lifelong commitment to social commentary into various music collaborations and spoken-word albums.

Today's middle-aged punk-rock fans tend to see Biafra as following the tradition of caustic '60s satirists like Mort Sahl, Dick Gregory, and Lenny Bruce. In particular, Bruce's lack of hoary one-liners signaled the death for squares like Henny Youngman: "Just got back from a pleasure trip. Drove my mother-in-law to the airport." And Bruce's obscenity-laced monologues became a litmus test for who was really a member of the counterculture. However, it's wrong to think Biafra is simply replaying Bruce's troubled career.

"Sometimes people don't really review my albums," explains Biafra, taking a call from his home in California. "They review their personal opinions of me without listening to the albums. A lot of times people read through it. In some ways, I've made my entire living off of bad press."

At least Biafra's bad press has allowed him to live. Bruce's satiric blasts caused him to be arrested in San Francisco in 1961 -- and even serve a short jail term in 1964. Mounting legal battles rather infamously overshadowed Bruce's performances as he was banned from clubs across the country. The loss of popularity contributed to Bruce's escalating drug habit. And like many great white hopes of the era, he ended up dead in the toilet, next to a syringe, in 1966.

But legal battles have certainly brought Biafra considerable nuisance. In 1986, the Gores and the PMRC -- during Senate hearings meant to create warning labels for albums containing swearing or sex talk -- targeted the Dead Kennedys' album Frankenchrist. Los Angeles cops also charged Biafra with distributing harmful material, and San Francisco cops even raided his house -- but the negative publicity backfired, launching Biafra on the college-lecture and talk-show circuits. Involvement with the court system has also inspired Biafra's art. In 1998, the three other members of the Dead Kennedys contended that Biafra failed to use Alternative Tentacles to promote the band properly and had mistakenly reduced their royalty payments. Among other acerbic retorts, Biafra recorded the song "Those Dumb Punk Kids (Will Buy Anything)," which appears on his second record with the Melvins, Sieg Howdy!

In spite of it all, Biafra remains -- in his astringently bitchy fashion -- judicious. For starters, he's way too busy politically, bugging everybody to vote for their city's school board, to let corporate music lawyers take all his energy. "We've come a long way since the lovely '70s, let alone the '50s," he says. "The problem is you can't always see these changes overnight. People want things to be all better immediately, while doing the least amount of work to get there."

The best evidence of all that Biafra isn't consumed with ill will is the continued strength of Alternative Tentacles. Whether you cite the variety of its catalog or the conscientiousness of its employees, the label's sheer existence provides a template for how radical politics gets translated into real life.

What keeps Biafra so focused, when so many people of so many political stripes think that trying to change the world is a wasted effort?

"Doing something is better than doing nothing," explains Biafra. "We all have to decide, in a way, and explore and find an ethical code and lifestyle that we can live with, and live up to, long term -- without being a jerk about it. Not everybody would agree that I've succeeded, but I've sure as hell tried, and I think I've done pretty good."

Jello Biafra's latest spoken-word release is a three-disc set called In the Grip of Official Treason. The set recently captured the dubious honor of being voted Vice magazine's "Worst Album of the Month." But don't look for Jello to lose his wobbly sparkle. Having battled the perceptions of both suburban America and the right wing, like his forebears, he remains well prepared to pitch fastballs at lefties too. Jello spouts off: "I think the only way we will get any real progress out of this supposed Democratic Congress is to just keep a blowtorch up their ass the whole time they're there. Don't ever let them get comfortable." Hipsters are just as likely to feel a sting, as Biafra is someone who continually says exactly what he thinks. "And then there's the other side saying there's no point in voting at all because all we get are these toxic corporate cartoon characters. Which is a legitimate point -- in a way. The reason I encourage people to vote, primarily, is because local elections are where it's at. It matters who's mayor, who's on the city council."

Biafra knows that the world is a whole lot more zingy when you're involved and thrashing around in it -- not just watching it go by from your living room couch. No matter who you think today's villains are, we could all make room for a little more Jello if we're gonna give 'em the middle finger.