Wednesday, June 20, at the Rock and Roll Hall of Fame and Museum. 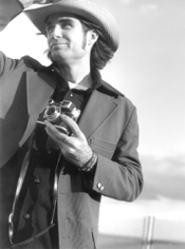 Small-voiced, low-key, and insidious, American original Jim White is a singer-songwriter who's in touch with the national psyche in a peculiar way. His deep connection to our more demonic vernacular becomes clear on No Such Place, his second full-length for Luaka Bop. The multi-textured disc is packed with strange characters and provocative imagery, from the heroine of "The Wound That Never Heals" to the self-deprecating country boy of "God Was Drunk When He Made Me." The world this Pensacola poet paints is one of drifters and missed opportunities. Tunes such as "King of the Road" (the intersection of Kraftwerk and Chuck Berry) and the withered and romantic "10 Miles to Go on a 9 Mile Road" run hard and deep. There's some Tom Waits here, and there's more Wall of Voodoo. What White will be like when he plays the Rock Hall is hard to predict. His latest album, its title cleverly and typically ambiguous, is his most produced. Morcheeba commandeered the first three tracks; Sade's Andrew Hale, Q Burns, and Yellow Magic Orchestra's Sohichiro Suzuki worked on the others. The result is a strange, intoxicating collection of a master of deadpan surrealism. The textures span the ethereal and the alarming, like the antiheroes and anitheroines who populate White's world. Like him, they seek redemption. Unlike him, they don't have artistry to call on. White writes deep-fried, from within; perhaps that's because he's one of five children of a military family and has had his share of poverty and pain (his bio says an industrial accident severely compromised his guitar playing). Whatever the case, he writes and sings with authority, painting sonic pictures of blasted grace.