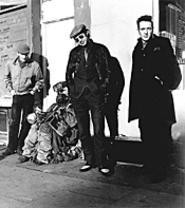 Here's a cultural riddle: Take an icon of a major pop movement and pretend the movement never happened: Ice Cube without gangsta rap, Ken Kesey without LSD, John Lydon without punk. What's left? Would we ever even have heard of these guys? Like Lydon, Joe Strummer rose with punk and will always be associated with it. But if punk had never happened, if the Clash had never happened, Strummer would have. At least, that's the possibility presented by Elgin Avenue Breakdown Revisited and Walker, two long-lost Strummer documents reissued this month by Astralwerks, both of which could have existed without punk and without the Clash.

When this writer stammered through a face-to-face interview with Strummer in 2001, little more than a year before his fatal heart attack, it was striking how incidental punk seemed. He recounted memories of first hearing the Stones' version of Buddy Holly's "Not Fade Away" over the radio in boarding school and busking through Europe in the early '70s with an acoustic guitar. He talked about his interest in Bob Dylan, Paul Simon, reggae, Eastern music, techno, and even Incubus. This is the same guy who had once called the Clash "the only band that matters" and sacked Mick Jones for going electronic -- and here he was, crossing more musical borders than Beck.

The earliest of Strummer's musical destinations to be captured on record is Elgin Avenue Breakdown Revisited, a gussied-up version of the original post-breakup LP by Strummer's first band, the 101ers. This was the unfortunate crew that Strummer abandoned in 1976, despite its strong London following, to form the Clash. "I lost a mate, my musical cohort, and my band when he left," says 101ers drummer Richard "Snakehips" Dudanski from his home in Spain. "For a year or so, I was well angry with him, but after a time, we renewed our friendship and worked together on bringing out the first edition Elgin Avenue Breakdown in 1981. Joe was always a special geezer."

It was while he was with this quartet of pseudonym-loving London squatters that John Mellor became Joe Strummer and helped make some of the most interesting music of the pub-rock scene. Like works from Graham Parker and Dr. Feelgood, these recordings are meaty, beaty, and soaked in the mythos of early rock and roll. The 101ers sound like a junk shop come to life, with Strummer's gravel-yard vocals balanced on a pile of Telecasters, Chuck Berry riffs, and pots and pans.

Like a lot of songwriters more concerned with communication than with introspection, Strummer's first instincts were crowd-pleasing ones, including the bracingly atmospheric "Keys to Your Heart" -- a tune as catchy as "Rock the Casbah" -- and rave-ups to enliven the dance floor of the imaginary juke-joint Strummer must have had in mind. Elgin Avenue Breakdown also contains evidence of Strummer's rumored sense of humor, from the grooving "Rabies From the Dogs of Love" -- which sounds like a classic R&B song until you realize it's a metaphor for the clap -- to the suggestion in "Keys to Your Heart" that love can cure not only drug addiction, but an aversion to cheese as well. The Astralwerks edition includes live tracks that see Strummer forming his lifelong obsession with Americana (a blazing rendition of Berry's "Maybelline") and Caribbean music (his first stab at the Jamaican rarity "Junco Partner").

"I think that there's a lot of curiosity and depth in the 101ers that other pub-rock acts didn't aspire to," says Astralwerks general manager Errol Kolosine, who helped leverage the American release of both albums from parent company EMI. "To me, this is a welcome opportunity to understand Strummer's roots, certainly, but it's also just a great, rockin' record."

Amateurishness may be part of the 101ers' charm, but the soundtrack Walker -- Strummer's first work after the Clash's split -- was made by a man with the tools to express his vision. The setting of the 1986 film, 19th-century Nicaragua, provided a musical context for Strummer's political interest in Latin America. Far more accessible than most world music, the album is a cascade of bright Latin piano, flamenco guitar and horns, and hints of the rockabilly that Strummer always admired.

"He had such an ability to embrace all styles of music, immerse himself in the culture, sociology, and sounds of that music, and then deliver his own brand," Kolosine says. "In my opinion, it came from a fundamental respect, rather than a desire to exploit."

The gorgeous instrumentals that dominate the album are complemented by several ballads in which Strummer's usual growl cools down to a rough croon. And even with its eclecticism, Walker is purely, intangibly Strummer -- and, after 2001's excellent Global a Go-Go, his most satisfying solo work. Never pretentious, never a stretch, it is, instead, the sound of Strummer's own infectious fascination.

That fascination with international music -- ranging from the Clash's Sandinista to Strummer's final, posthumous disc, Streetcore -- was born of restlessness, rather than the hippie exoticism that drove the trend. "Say you're listening to something from Indonesia," he said in the 2001 interview. "I like that free feeling. You don't know what it's gonna do next. You can't help but know with Western music -- we're kind of overfamiliar with it."

When he discussed the BBC radio show he had hosted and deejayed around the turn of the millennium, Strummer's fascination for crossing musical borders was palpable. "A guy up in the Himalayas wrote me and said, 'Thanks for the show. I use it to practice my bass guitar,'" a wistful Strummer explained. "There really is some guy out there in a hut, with a bass, at the end of the earth, funkin' it up."