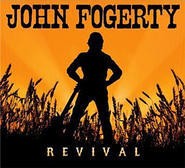 If the opening track of this splendid new disc doesn't convince you that John Fogerty has returned to full strength as a songwriter, you're either deaf or really, really depressed. "Don't You Wish It Was True" is the kind of rootsy anthem that Fogerty used to kick out with miraculous regularity.

All the trademark pleasures are in evidence: the twangy guitar riffs, Fogerty's surprisingly soulful growl, the pure melodies, the dependable backbeat. The standout track here is "Long Dark Night," a blistering indictment of the Bush administration. "Georgie's in the jungle, knocking on your door," howls Fogerty. "Come to get your children, wants to have a war." Fogerty even pokes fun at himself -- and the musical legacy that has dogged him -- on the hilarious "Creedence Song."

There's an occasional misstep; Fogerty ends up sounding like Bon Scott on the frantic "I Can't Take It No More." But overall, the man who once stood at the center of American roots rock has placed himself there again and made it sound like he was never gone.