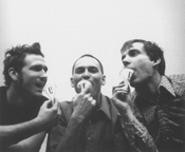 Born in Toledo, Enon singer-guitarist John Schmersal now lives in Brooklyn, New York, but he spent his formative years in Ohio. He eventually ended up in Dayton, where he joined the band Brainiac in 1994, about two years after it had formed. Schmersal, whose parents live in Cleveland, initially spent his summers working here to pay for school at Ohio University in Athens, where he studied as a music major for two years before joining Brainiac.

"One summer, I worked at Sea World, directing traffic out there," he recalls in a phone interview from his home. "That was one of the weirdest jobs ever. I didn't enjoy working for them. Their rules were bogus. We had to clean up the parking lots before we started. Some nights, I wouldn't get out of work until late, and I was pretty haggard. I was running up to my post, and my boss said, "You're late, and that means you lose your dollar-an-hour bonus.' She told me what post to go to, and it was ridiculous. I was cleaning up and found a dirty diaper here, a popcorn canister there, and I found a bag of weed, which I quickly stuffed into my pocket. It made the day a little more pleasant."

While Brainiac, which released several records on Touch and Go Records, never inked a deal with a major record label (DreamWorks was reportedly interested during the band's final days), it was one of several great bands to emerge from Dayton in the early '90s (others included Guided by Voices and the Breeders). Characterized by analog keyboards and singer Tim Taylor's hiccuping vocals, the group made quirky new-wave riffs hip. Its career came to an untimely end when Taylor died in a car accident three years ago.

"I started making music immediately after that, because I didn't know what else to do with myself," Schmersal says when asked how he reacted to Taylor's death. "I was just trying to keep busy. I had a four-track recording that pretty much became a record [called Forget Everything]. I didn't understand [why Taylor died], and also I got into a fight with him shortly before that happened, and we resolved it, sort of, but not really. So when he died, it kind of fucked me up, and it took me awhile to realize that our fight didn't matter."

Schmersal recorded Forget Everything under the moniker John Stuart Mill, in an old Masonic Temple in Kentucky, but for his new group, Enon, he recruited percussionist Rick Lee and drummer Steve Callhoon of Skeleton Key to play with him. The trio wrote several songs and went on tour before recording its debut, Believo!, which was released last month. Believo! might sound more accessible than most of Brainiac's musical output, but it's still strange and unusual music that relies upon electronic samples and unpredictable changes in tempo.

"What was cool about [Believo!] was that we spent more time with it," Schmersal says. "Once we had the foundation of the tracks, we got to play with it and sit on it a little bit, which I never got to do before. I think it benefited from the fact that the tracks were put together spontaneously, but composed after that. Some people have said that, in relationship to Brainiac, it's too "pop' or forgiving, but people who don't have that context think it's really weird. I think it's the most pop thing I could have written. It was a fun record to make."

Schmersal also says that he's started recording incidental music for cartoons (specifically, music for cartoon versions of the Banana Splits for a network on the web), and that Enon will be releasing a number of singles throughout the year. Enon plays on April 23 at the Grog Shop (1765 Coventry Road), where it opens for Girls Against Boys.

Not just your everyday hip-hop summit, the conference dubbed "6 Million Ways to Speak: The Oberlin Community Hip-Hop Conference 2000" will bring some heavyweight rap artists into Oberlin College (153 West Lorain Street, Oberlin) for the affair, which will run from April 20-23. Among the artists scheduled to perform are Dead Prez, Common, the Beat Junkies, and the Arsonists. Actor Saul Williams (who appeared in the movie Slam, a film about the New York spoken-word scene) will give the opening lecture and performance on April 20, and panels, workshops, and movies will take place throughout the weekend. For more information, call 440-775-8102.

The second annual Bob-Fest, an evening devoted to local artists covering the music of Bob Dylan, will take place on April 20 from 9 p.m. until midnight at Northside (111 N. Main Street, Akron). Organizer Amy Miller says that last year's event, which drew some 30 regional artists, was such a success she had to do it again.

"I wasn't going to do a Bob Dylan fest this year," Miller admits. "I was thinking about doing something else this year, like the Grateful Dead or Bob Marley, but everyone wanted Bob Dylan, so I lost."

Artists interested in participating can simply show up the day of the event. For more information, call 330-434-7625.

Send local music info and bags of weed to jeff.niesel@clevescene.com.