Friday, January 12, at the Grog Shop. 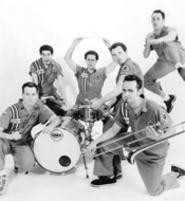 Indiana's ska sensations hark back to that magical time when bands actually attempted to entertain a crowd while on stage, as opposed to staring at their shoelaces and moping for an hour and a half, offering the occasional pelvic thrust in lieu of audience interaction. With this six-man crew, you get dance contests, intense choreography, funk breakdowns, stand-up comedy routines, wanton instrument swapping, and a bombastic rendition of "Devil Went Down to Georgia." No shoegazing or sneering or snoring to be seen for miles around. Musically, they cling to the hyper-energetic pop-ska landscape that Reel Big Fish briefly illuminated back in the late '90s, but they manage to avoid sounding like opportunistic scenesters, perhaps due to a penchant for copping other genres: Check out "Old School Master," an epic battle rap delivered over Atari-era video games. If you spend an enchanted evening with these turkeys, you'll walk away confident they genuinely enjoy what they're doing and whom they're doing it with. Doesn't sound like much, but not until you experience it in person do you realize how rare Johnny Socko really is.