With Expecting Rain. Sunday, June 6, at the Beachland Ballroom. 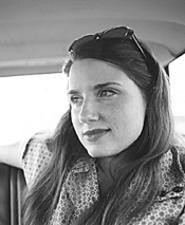 ANTI- is the side label that Epitaph Records has used to sign more established acts. Problem is, most of the bigger names they've landed are a bit past their prime. So, as Tom Waits and Nick Cave age gracefully, ANTI- went out and found this young, pretty female version of the troubled troubadour.

On her recent debut, Escondida, Jolie Holland dabbles in similar old-timey sounds -- specifically Depression-era dust-bowl blues -- but in a manner that's much more chill. Holland is basically a West Coast folkie; her drowsy ruminations on long-lost loves are more California dreaming than Great Plains ghost stories. But her ability to blend deep Celtic roots, jazzy vocal phrasing, and updated song structuring is pretty unique. Songs that veer too close to Birkenstock-in-trade get dragged away by her pliable pipes, which drift like Chet Baker's lonely lilt, and her restrained, emotionally compact guitar and piano playing.

The sometimes overly affected Irish accents can get corny. And the fact that she must state in the liner notes that by singing "Old Fashioned Morphine" she is not condoning drug use shows that the kind of folks who do this sort of reverent excavation are often art students who grew up on Lucky Charms, not government cheese. Still, there is a load of talent here that could prove sturdy.