January 20, 2000
comment
The End of the Affair Official Site 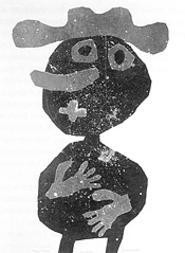 French artist Jean Dubuffet was no snob. He was as enthralled with a sketch by a self-taught artist or a schizophrenic as with a masterpiece by Paul Cézanne. In his quest for what he viewed as the origins of art, Dubuffet studied the work of unschooled artists, children, and the mentally ill. But he went far beyond those unassuming sources.

The Lithographs of Jean Dubuffet, an exhibit now on view at the Cleveland Museum of Art, encourages us to reconsider Dubuffet's reputation as an "anticultural artist" -- an artist who believes that creative urges operate independently of cultural circumstances. Following the devastation caused by World War II, Dubuffet questioned the achievements of civilization and went back to a primitive style. Although he drew on unsophisticated sources, he thoroughly digested his influences and produced work that belied its surface simplicity.

In focusing attention on Dubuffet's commitment to printmaking, this exhibit not only makes the academic point that such works were cut from the same conceptual cloth as his more well-known paintings, it puts the spotlight on his pessimism about the human condition (a pessimism that the artist hesitated to acknowledge, at least in public). Simultaneously witty, disturbing, and direct, the 35 lithographs preserve a view of the world as a scorched, infertile place populated by human beings whose swelled heads and grotesquely exaggerated smiles hint at lives filled with illusions of grandeur. The great German novelist Thomas Mann once said that "the achievement of modern art is that it has ceased to recognize the categories of tragic and comic, and views life as tragicomedy." So, too, with the work of Dubuffet.

He was among the artists coming of age in Europe after World War II, a group that included Karel Appel and Antoni Tàpies. All these artists burst forth with work that, in its layeredness, matched the dense flow of information that distinguished modern life. In the U.S. around the same time, abstract expressionists like Jackson Pollock were developing along similar lines, but Dubuffet's tragicomic view of life had little in common with Pollock's exuberant encounters with paint and canvas.

The knowledge of Hiroshima and the Holocaust piqued Dubuffet's interest in what lay beneath the veneer of the civilization that had just gone berserk. It wasn't easy for anyone, not just artists, to fathom how S.S. officers could spend the day torturing victims and then go home at night and listen to Mozart string quartets. With such incomprehensible developments in the world, Dubuffet made his art understandable by reverting to a primitive style. "Perhaps," wrote Dubuffet in another context, "the most gracious way to talk is to use the simplest words; and to walk beautifully is it necessary to have longer legs than other people, or to walk upon one's hands?"

One of the most disturbing pieces in the show, a color lithograph called "Carrot Nose," is a fine example of Dubuffet's brand of tragicomedy. Here is a human being with a distorted figure, an enlarged head, a bizarre hat, and a nose that does indeed look like a carrot. One immediately laughs: This is not what people should look like. One can go beyond the superficial reaction, though. Perhaps this distorted person does not like having a carrot nose, a bizarre hat, and a distorted figure. Perhaps being an object of laughter is this person's way of currying favor with people who would otherwise be dismissive or derisive. If one looks at "Carrot Nose" this way, it's not easy to merely laugh. Rather, this work encourages the viewer to wonder about how people live with illusions, and how there is sometimes a gulf separating the way we view ourselves and the way other people view us. Mixed with the childlike simplicity of the image and its whimsical title are deeper undercurrents that vie for the viewer's attention.

Curator of Prints Jane Glaubinger, in an exhibition statement, emphasizes Dubuffet's innovative use of the lithographic process. From around 1958 to 1962, he created a series of prints called The Phenomena, which broke new technical ground. This set of 324 works took, as its departing point, images such as oil-stained water, walls, soil, stones, an old suitcase, and even a friend's bare back. The artist achieved all sorts of novel effects because the drawings were successively printed in different colors. New textural details emerged and others disappeared as this printing process took place.

Around 20 images from this series are on display, and they are not easy to look at. Although viewing a section of soil or a person's bare back is not in itself disturbing, it is troubling when those images seem as though they are magnified to the point of unrecognizability. Common objects under a microscope can take on a grotesque aspect. Furthermore, titles like "Geography: Tormented Earth" amplify the dark mood. If, while looking at a Pollock canvas, one is drawn to the artist's intoxicating rhythms and sense of energy, with Dubuffet there is cool acknowledgment of chaos. It's as though one is being shown a scorched, war-torn landscape magnified by a microscope lens, but any moral implications have been carefully strained away to allow the viewer maximum interpretive freedom. One marvels at the textural variation, all right -- but come to think of it, it's the textural variation you might find after a tornado sweeps through town and reduces everything to rubble.

Dubuffet is an archaeologist of cultural collapse, and pieces like these are the results of his fieldwork. But his public statements are those of an artist who refused to entertain the proposition that his work contained a substantial dose of pessimism: "Certain people believe the mood of my art to be bitter. These people have overlooked my effort to substitute another and vaster beauty. I would like people to look at my work as an enterprise for the rehabilitation of scorned values and, in any case, make no mistake, a work of ardent celebration."

Dubuffet's faces are as unnerving as his landscapes. They look like a combination of Mr. Potato Head half-morphed into Barney. The huge, awkwardly rendered face in "Smile," a color lithograph of 1962, is unsettling in Dubuffet's best manner. The face is a deep rosy red. (It's common in Dubuffet's oeuvre to find faces and bodies in this color because, for him, it evoked the image of blood coursing through the body's veins.) There is something comic about a terrified Mr. Potato Head or a Barney who doesn't look at all friendly. As Glaubinger points out, "Like the dada and surrealist artists in the 20th century, Dubuffet wanted to shock stodgy bourgeois society," and to get there, he drew figures "spontaneously, and with somewhat arbitrary proportions." This work, like everything else in the exhibit, also withstands a second look long after the initial shock has worn off. Smiling doesn't necessarily reflect inner peace or relaxed goodwill for one's fellow human beings, and this crudely drawn face seems more terrified than happy. As in so much of Dubuffet's art, one is led back to the notion of the world as a place of disguises and masks.

Dubuffet, who died in 1985 at the age of 84, himself wore a mask. In his public statements and published writings, he stressed the celebratory aspect of his art. The work, as this show makes clear, however, was often as celebratory as a doomsday prediction. He drew inspiration from children's art and that of the mentally ill, but, to an even greater degree than most 20th-century artists, he was a product of Hiroshima and the Holocaust. This exhibit rescues him from those admirers who claim that he was a primitive whose work was at its strongest when it ignored culture and history.