Just One of Those Biopics

The songs are immortal, even if Porter pic isn't. 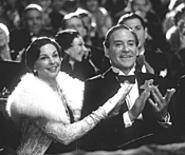 "Is this one of those avant-garde things?" a dying Cole Porter (Kevin Kline) warily asks Gabe (Jonathan Pryce), a sort of Ghost of Musicals Past who appears out of the ether to shepherd the composer through the this-was-your-life montage that makes up Irvin Winkler's biopic De-Lovely. "It's a musical -- it should be entertaining," insists Porter, portrayed by Kline as a song-and-dance man gliding through even life's roughest patches. Even Porter is skeptical of the clunky flashback framing, which eventually gets shuffled off stage left so that Winkler and screenwriter Jay Cocks can tell their story the old-fashioned way. And make no mistake: De-Lovely is as old-fashioned as movie musicals come, a film in which people sing what they can't say; you don't go five minutes without Kline or Elvis Costello or Diana Krall or Alanis Morissette breaking into "Just One of Those Things" or "Let's Misbehave" or "Love for Sale" or another immortal melody over which Porter wrote his coded lyrics. If nothing else, the movie will move product: My neighborhood Borders was sold out of the soundtrack last week, well before anyone who bought it had been able to actually see the movie.

Alas, what sets this apart from the resplendent black-tie-and-white-pearls 1930s and '40s movies Winkler wants to replicate is that this Porter bio doesn't shy away from his homosexuality. Michael Curtiz's dreamy-weepy 1946 Night and Day, with Cary Grant as Cole Porter as Cary Grant, stayed outside the bedroom door; it was enough just to have Grant behind the piano, with his own hush-hush whispers lurking in the shadows to provide the barely concealed subtext. But this film climbs into bed with Porter and the random hunks about whom he writes his secret love songs; it revels in the freedom to be truthful, even if it's not concerned with being terribly factual. "I wanted every kind of love that was available," a wistful Porter tells Gabe, as they sit in a decrepit theater and watch his life unfold onstage and onscreen.

Yet even with the freedom to tell Porter's globe-trotting life story with a few more man-on-man kisses, former Martin Scorsese producer Winkler and former film critic Cocks, who wrote The Age of Innocence and Gangs of New York, like their love stories traditional -- man-on-woman, especially if that woman is Ashley Judd in the role of Linda Lee, the socialite who became Porter's wife in 1919. Though theirs was at best a marriage of convenience -- she was divorced and wanted to keep her life of privilege, he needed a beard -- Winkler depicts their relationship as a doomed love affair. Judd, freed from the girls-with-guns ghetto in which she's squandered much of her career, is exceptional in the role, a woman for whom life is nothing more than forced smiles and barely concealed misery. But it's also a nasty trick, because Lee was much, much older than Porter and, depending upon which history you choose to believe, more caretaker than lover. Judd's too young and too beautiful for the part, but Winkler wants us to believe in the possible romance rather than acknowledge the sad convenience of their partnership.

Worse, the movie never tells us when anything's happening or allows us our own interpretation of their relationship; if Porter's lyrics were vague and open to interpretation, Cocks's lines are too literal and too flat, which doesn't serve a songwriter for whom metaphor was a means of survival. "What are you afraid of?" Lee asks Porter, shortly after they meet at a party where fireworks explode over all of Paris, in a scene too reminiscent of To Catch a Thief. Porter tells her he's only scared of himself, foreshadowing his move to Hollywood and the romantic liaisons that threaten to out his sexuality and ruin his career. Every line of dialogue is meant to explain a song or hint at something else around the corner; the mystery of his music is ruined, as Winkler and Cocks rush to pull back the curtain on the magician. Inadvertently, it's Porter who reveals the movie's greatest flaw, when he explains to Gabe that his words "always did sound better with music beneath them."

And, ultimately, it's the songs that energize this highlight -- and lowlight -- reel; you may forget the movie when you walk out the theater, but you will do so while humming the soundtrack. The casting of Costello and wife Krall, as well as Sheryl Crow and Robbie Williams and other pop somebodies, is a serviceable gimmick that works more often than not. Costello's "Let's Misbehave," performed at a party where Porter is dressed as Caesar and lasciviously eyeing his ballet-dancing boyfriend, is a generous treat, and Morissette's song-and-dance rendition of "Let's Do It (Let's Fall in Love)" suggests a bright Broadway future once she slips off the pop charts. But Crow's "Begin the Beguine" is a dud, while Natalie Cole's "Ev'ry Time We Say Goodbye" is but a pale shadow of Ella Fitzgerald's. It's fitting, since the movie is but a pale imitation of Porter's amazing life. Here, it just looks, well, kind of interesting.