Bernie Mac attacks, but the 2001-'02 season has delivered little else. 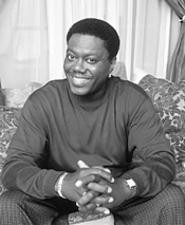 As the new year begins, so, too, does a new TV season -- that no-man's-land of programming occupied by filler, fodder, and folly, otherwise known as the new NBC series starring Hank Azaria, Imagine That. In coming weeks, two Supreme Court dramas make their debuts (First Monday, starring Jim Rockford; The Court, with the Flying Nun), Survivor goes Polynesian, Andy Richter gets his own Fox show, Dawson's Creek creator Kevin Williamson is up a new one without a paddle with Glory Days, and at long last, Denis Leary's back on The Job for ABC. Depending upon your tolerance for the obvious and inane, the forthcoming winter lineup is full of promise or little more than a threat -- much like the 2001 fall season.

While the networks' midseason castoffs clog the drain, there's little to celebrate about last year's fall season -- a season bereft of might or momentum after the attacks of September 11, which pushed back the start date to some time after the World Series. Only one network made any noise, at least in terms of quality content: Fox, home to The Bernie Mac Show, The Tick, and Undeclared, the three best prime-time comedies. Bernie Mac's brawl-in-the-family sitcom is the most honest family portrait since Archie sat in his own comfy chair. Undeclared is Freaks and Geeks graduated and majoring in bwah-hah, and The Tick is The Bomb. Problem is, Fox is doing what it does best: burying its best shows in shitty time slots (The Tick) or so screwing with the schedule, you can't find them (Undeclared).

It looks like Undeclared is doomed, and The Tick is bound to follow soon enough. But why expect a network with Temptation Island to pay any attention to its quality shows? Someone should make Fox programming boss Gail Berman actually watch what's on Fox. Do you think she even knows David Duchovny's not on The X-Files? Or do you think she even knows it's still on the air (and just barely -- it's astonishing how they're rehashing eight-year-old shows with their "new" cast, as though no one will notice)?

If the pilot for That '80s Show is any indicator, this appears to be a network in trouble. It's shit, shit, and shit -- and they've let the entire world know, with ubiquitous promos more noxious than The Geena Davis Show. They might as well just hire Geraldo Rivera as a "newsman." Oh . . . wait. Maybe when it cancels The Simpsons, Fox will get the respect it's never quite deserved; when will the network realize it's time to throw out the milk that expired in 1999? As for Ally McBeal, well, it's a damned sight better than Boston Public. So is blindness. Like the Big Three, Fox will soon have to come to grips with the fact its so-called best is past its prime.

UPN's got Enterprise, an intolerable rehash of every Star Trek story line ever (I haven't tasted this much leftovers since my grandmother died) that garners some 2.5 million viewers every week. And Buffy the Vampire Slayer isn't even pulling Enterprise numbers. Either the comic shops are staying open later or the dorks started dating.

And how is Smallville a hit when two episodes of the execrable Family Guy beat it in recent ratings? Success is relative in the age of DirecTV and so forth, but in the old days, it would be considered a cellar-dweller. And it ought to be, too: Clark Kent without Superman is like George W. Bush without Osama bin Laden -- the ineffectual, bland good guy.

The WB is a sort of fascinating network: It has its hits, but it still smells of shows the Big Three didn't want. I always wonder why Seventh Heaven isn't paired with The 700 Club: Does it exist solely to make up for several seasons of Seinfeld, the most Jewish TV show since The Hebrew National Kosher Hour?

And as for the Big Three: to hell with all of them -- save, perhaps, for NBC, which at least gives us Scrubs. Yes, it has loads of its own problems -- namely, it's got that Ally McBeal fantasy-life disease, and it spends a little too much time explaining the jokes for the short-bus riders. But at least it's clever, in a TV kinda way. (If NBC were smart -- and it isn't -- it would move Scrubs to the Inside Schwartz slot and groom it as a Friends replacement.) But look at what NBC and ABC and CBS gave us this year: Emeril, The World According to Jim, Max Bickford's Opus, The Ellen Show, Bob Patterson, Inside Schwartz, The Agency, The Guardian, yet another fucking Law & Order. And look at what they leave on: I had no idea Dharma & Greg and Frasier were still on the air, and apparently, neither did their writers.

CBS need not change a thing, of course: It has six shows in the Top 10, which will fall off once Survivor's done. The other nets should be panicked, however: The "comfort food" thing's gonna disappear quickly in the new year, as people put September 11 behind them in an untarnished 2002, full of promise.

That's the only explanation for the success of the recent Carol Burnett special: People wanted to connect to this lost, happier part of her life. It was shit, dear God, but it offered a chance to relive "the good ol' days," even if they occurred during a hostage crisis, a gas shortage, and a recession. If NBC did a weekly prime-time clip job of old Carson shows, it'd be Top 10 stuff.

And NBC has other problems: Friends is on its last legs, E.R. hasn't been any damned good since George Clooney left, and Will & Grace is the world's most obvious (and offensive) gay joke since Isaac Mizrahi got his own show on Oxygen (which I actually like . . . a lot). NBC does contain the most aptly named TV series ever: Just Shoot Me. Wouldya?