Kantina Raises the Bar for Kosher Food in Cleveland 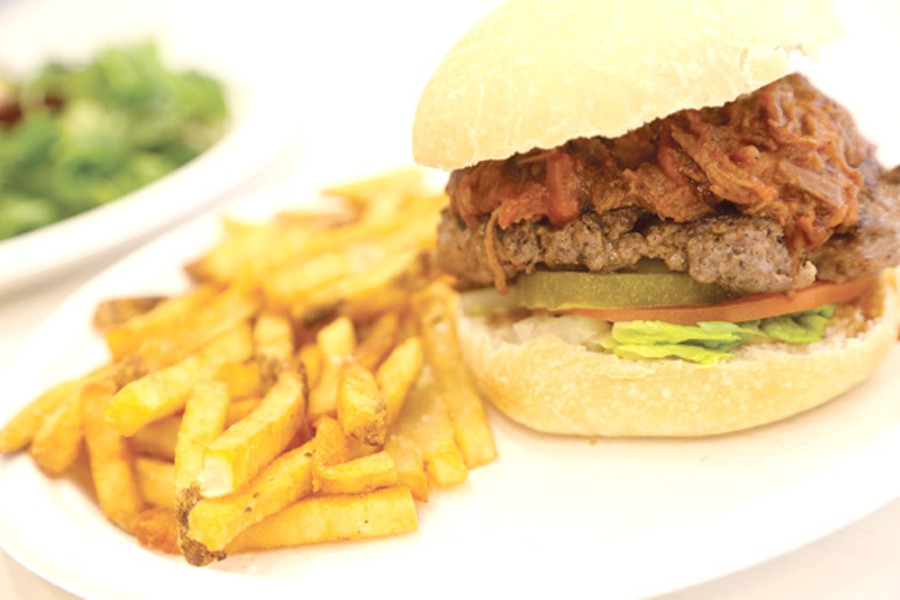 Only a small percentage of diners will appreciate the significance of the circle-wrapped K in the restaurant name Kantina, but to those in the know the symbol is meaningful. It indicates that the restaurant is kosher, and as such it complies with the strict set of Jewish dietary laws that the designation requires.

Kantina isn't Cleveland's first kosher restaurant, but it is Cleveland's newest one. It also is the most contemporary of the genre, one typically filled with — in this market anyway ­— modest catering kitchens and unassuming delis set within walking distance to Orthodox synagogues. Kantina is different for a number of reasons, but most notably for its location on the campus of Case Western Reserve University.

"The Jewish student population at the university has been growing, and one of the objectives with this restaurant is to have a kosher option that was quality-based," explains Harvey Siegel, past president of the Cleveland Hillel Foundation, which helps Jewish students at local schools celebrate their Judaism. "One of the prime objectives was making this a home away from home where the students feel comfortable."

It's estimated that 12 to 15 percent of each entering class is Jewish, Siegel notes, but until recently the kosher meal plan consisted of frozen and reheated foods brought in from a kosher caterer and served in an aging building. Kantina is located in the newly renovated Albert and Norma Geller Hillel Student Center, a bright and glassy building in the heart of University Circle.

"It was a modern-day Fiddler on the Roof story; it was a shidduch," says Bromberg, referring to the age-old system of matchmaking within the Orthodox community. "They needed a food service provider and mentioned it to someone who knew me and they made the introduction."

Apart from Friday night Shabbat dinners and High Holidays, Kantina is open to the public. The restaurant will appeal to the sizeable sector of Cleveland diners who elect to eat kosher, but also to anybody else looking for a fresh, simple meal made from scratch using quality ingredients. Israeli-born chef Ran Saggi weaves together Middle Eastern and American staples on the concise menu. Bright, fresh and wholesome salads like the Apple and Beet ($6.99) with soy-honey vinaigrette and the Quinoa and Arugula ($7.99) with balsamic dressing not only are tasty ways to kickstart a meal, they're very likely the cleanest greens in the city.

"Bugs aren't kosher," Bromberg says, not at all joking. All lettuces are soaked, agitated, and scrutinized multiple times to verify that they are in fact bug-free and thereby kosher.

Kantina's hearty Cobb salad ($9.99) doesn't feature the customary blue cheese — dairy ain't kosher in the company of meat ­— but it does come with hard-cooked eggs, sliced chicken, ripe avocado, a mountain of mixed greens and a fresh-baked roll. Fat, house-formed beef burgers ($8.99) come topped with — no, not cheese — but lettuce, tomato, onion and "saggi sauce," a sweet and spicy aioli. Other burgers come gilded with cole slaw and barbecue sauce. All are tucked into a house-made bun and paired with sides like house-cut fries, rice pilaf or Israeli salad.

Saggi has a way with falafel ($6.99). The crunchy, golden brown discs are layered into a long bun with a Mediterranean-style chopped vegetable relish, creamy tahini sauce, and a Yemenite relish. Also crispy and delicious, a pounded chicken schnitzel sandwich ($8.99) comes with all the fixings.

Kantina, which opened in January, is rolling out in stages. This first phase features an all-day "bistro" menu of soups, salads, sandwiches and burgers served in a fast-casual setup. On Sunday, March 6, the restaurant will debut Cleveland's first and only kosher brunch buffet with items like challah french toast, made-to-order omelets and meat carving stations. On Monday, May 16, the restaurant will open for full-service dinner with an all-new menu starring fish, pasta and steaks.

Despite the fact that many of the packaged foods we buy on a regular basis are kosher — marked as such by those omnipresent "K"s and "U"s ­— most shoppers and diners (including Jewish ones) have no clear understanding of the concept. It's an issue that owner Seth Bromberg understands and is happy to clear up.

"It's hard for us to explain who we are, what kind of food we're serving, how we're serving it, and the fashion that we're serving it," says Bromberg, who grew up in a kosher home. "But everything is made from scratch using fresh ingredients that just so happen to be kosher."