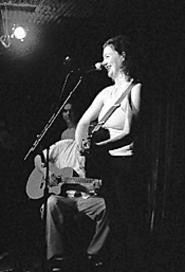 Kathy Zimmer grew up in rural Nebraska, listening to the old-time country music of such artists as Loretta Lynn and Johnny Cash. She studied classical music as an undergraduate at the University of Nebraska and earned a master's degree at the Cleveland Institute of Music. But listening to her debut CD might make one think she was the adopted daughter of Joni Mitchell.

Zimmer lives in New York City now, playing "anti-folk" music around the clubs on the Lower East Side. She combines elegant guitar work with rich vocals that engulf songs without smothering them. Percussion, extra guitars, and flutes are added judiciously. Her lyrics are imaginative, a little bit dark, and a touch sardonic. Zimmer possesses virtually zero commercial potential, but lovers of modern acoustic music should find a way to give a listen to this bright and earnest new artist.