The Kills blacken the blues. 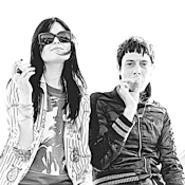 The Kills treat feedback as foreplay. When Jamie "Hotel" Hince points his guitar at Alison "VV" Mosshart, she writhes and convulses orgasmically. When Mosshart fixes her fire-starting gaze on him, he paws at his instrument as if by passion possessed. Steam rises from the duo's stage show, though the perspiration starts out as cold sweat. Strange as it may seem, given the duo's apparently abundant confidence, Hince and Mosshart thrive on tension, and not just the sexual kind.

"We're always nervous," Mosshart says. "We're nervous when we wake up. If we're distracted beforehand and don't have time to think about playing, those are the worst shows, because we walk up there feeling quite normal."

Minutes before this cell-phone conversation, the Kills played a South by Southwest-related afternoon showcase at an Austin record store. This was a suitably stressful situation, given that the Kills' death-blues demand darker settings. For that matter, so does Mosshart's vampiric complexion, which is why she's wandering away from the wide-windowed site of the six-song set and seeking shelter from the sun.

Mosshart developed her disdain for daylight in Vero Beach, Florida, where she fronted the smarter-than-usual pop-punk outfit Discount from the age of 14 until she was 19. While on tour in 1999, she spent an evening in a South London apartment, directly beneath a guitarist whose strangled notes seeped through her ceiling. Suppressing her anxiety, she finally knocked on the door to unmask the experimentalist upstairs.

It was Hince, who had just left the noisy project Scarfo and was working on solo compositions. His room's layout was similar to her own at home, with the autobiography of Andy Warhol's muse Edie Sedgwick prominently displayed. Mosshart had read it 11 times; its descriptions of an art-as-life existence made her yearn for a community beyond the Warped Tour circuit. The two bonded over the book, discussing it for six straight hours, and, she says, "That pretty much sealed our friendship forever."

It also secured Mosshart's impending expat status. Discount was soon to be no more, having already announced its plans to dissolve after one last string of dates. In the meantime, Mosshart sent Hince sound collages and soundtrack snippets for videos she had made; he replied with suggestions about which ideas to enlarge. After six months of constant correspondence, Mosshart bought a one-way ticket to London.

"I never wanted to be the girl singer with a guitar, sitting on a stage," she says. "I wanted a companion, and I needed an editor. He's the first person I wanted to read all those pages I had written and hear all those songs I'd done. We both opened up, which was a strange thing for each of us to do, because we're both quite shy. We did it awkwardly and in our own way."

The Kills had few possessions, fewer friends, and no label deal when they started assembling their debut disc, Keep on Your Mean Side, and that sense of desperate isolation informs its emotionally intense song cycle. The 2002 album was something of a success, which led to an eye-opening six-week stint on a Franz Ferdinand tour.

"We played in front of 7,000 16-year-old girls every night, all smashed up against the stage checking their watches because they just can't wait to see [FF frontman] Alex [Kapranos]," she says. "I absolutely loved it. It made me feel free."

While the duo enjoyed their arena experience, they had trouble writing on the road. Now signed to a major label (Rough Trade/RCA), the Kills could have secluded themselves in style once they returned home. Instead, they retreated to Benton Harbor, Michigan, where a studio houses Sly Stone's cursed Flickinger mixing deck. Legend has it that the console brought ruin to countless engineers and careers, making it just the right electronic accessory for the discord-fueled duo.

The Kills arrived with plenty of inspirational materials (journals, artwork, photographs), but no completed compositions. After a month, they emerged with No Wow, an album that draws its dire vibe directly from the environment that produced it.

"Bands tend to seek out a place that's really comfortable, with PlayStations and couches and catering," Mosshart says. "There's no adrenaline. I can't create like that. We're talking about living in Russia for a month next time -- doing something different that will wake us up and freak us out."

Both arousing and alarming, No Wow induces flashbacks to the blues' bad-ass era, when storytellers described illicit affairs from an unrepentant first-person perspective and guitar-slingers sold their souls for solo skills. Mosshart must have gone through her own legal wrangles with Lucifer to become P.J. Harvey's dirty-blues doppelgänger. The beats throb at times, but Mosshart is no dance diva. "If I'm so evil, why are you so satisfied?" she sings, funneling the phrase through an audible smirk. The answer is that the Kills, like the bards of the Delta, make vicarious menace more compelling than cheerier empathetic emotions.

Like another coed duo with blues roots, the Kills understand the importance of appearances. While the White Stripes enhance their brand name with candy-cane costumes, the Kills favor an ever-changing but always stylish wardrobe. Both members have chiseled cheekbones, with Mosshart evoking images of a gothed-out Aimee Mann and Hince looking ready to play the charming leading man's edgy rival in a British comedy.

"With bands, if they look like roadies, I won't listen to them," Mosshart says. "Maybe I'm really on-the-surface like that, but I think the same thing about guitars and cars. If it looks cool, it's cool, and if it doesn't, I don't want to play it or drive it."

Flashy as they might be, the Kills harness dread every time they step on stage. But more important than the nerves that fuel the duo's raw power is the rare connection between the two. Their partnership transcends the tangible reach of most romantic relationships. (Mosshart and Hince deny such an involvement.)

"He is a direct line to all my emotions," Mosshart says. "When he's down on something I've done, I take it really seriously. And when he thinks it's great, I believe it and don't care what anyone says. He's all the things I want out of myself that I'm not."