Keira Get Your Gun

Domino chronicles the life of a model turned bounty hunter. 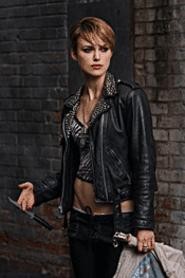 Her name is Domino Harvey, and she is a bounty hunter. If you've seen even one TV spot or theatrical trailer for Domino, you've heard that message ground into your brain like an annoying jingle. What you may not know is that Domino Harvey was a real person, daughter of actor Laurence Harvey (of Manchurian Candidate fame), and a model turned bounty hunter. The character of Domino Harvey, played by Keira Knightley in Tony Scott's new film, is based on the real one, but only loosely, as most of the plot is invented and the characters changed -- it's Domino's "real life story . . . well, sort of." The real Domino died from drug-related complications shortly after the movie was completed; perhaps it's best never to allow a biopic of yourself until you're good and old.

The film's story is framed by an FBI interrogation, as psychologist Taryn Miles (Lucy Liu) questions Domino about an armored-car heist. Domino's narration ensues, but not all of it is directed at her interrogator; at one point, to emphasize that she isn't going to die during the course of her story, she says, "This ain't Sunset Boulevard," a reference to the Billy Wilder film narrated by a corpse. This demonstrates not only an awareness of her own life, but also the knowledge that she's a character in a movie.

Initially, we're plunged into the middle of a shootout, but just as that starts to get interesting, the realization sinks in that this is going to be one of those films that hooks you with an exciting first scene, then rewinds to the beginning and takes forever to get back to the part that caught your interest. So we get the death of Domino's father; the decision by her mother (played by Jacqueline Bisset) to move to Beverly Hills, because she's struck by the "brilliance" of the Beverly Hills 90210 cast; Domino's time in a religious boarding school, where she learns how to steal and flip a coin; Domino in a sorority, getting mocked for her small breasts and beating up those who say anything about it (though when Knightley shows her breasts later in the film, few will complain), and ultimately Domino answering an ad in the LA Weekly for a seminar on bounty-hunting.

The seminar turns out to be a scam, but before those responsible can get away, Domino catches up with them, making an impression with her knife-throwing skills and low-riding jeans that flaunt butt crack. Soon enough, she's part of the team, alongside Ed (Mickey Rourke), who "lost a toe during a prison riot. The man's a warrior." Also on the team is Choco (Edgar Ramirez), a hot-tempered ex-con, who crushes hard on Domino but won't do anything about it, and who speaks mainly in Spanish, because he thinks it impresses the ladies. Finally, there's Alf (the outstanding Rizwan Abbasi), a former member of the mujahedin from Afghanistan, who eats cats and is an expert in bomb-making.

About halfway through, Domino stops being an overly narrated biopic and starts becoming a heist movie, initiated by bail bondsman Claremont Williams III (Delroy Lindo): When his armored-car service in Vegas gets held up, he decides that his own bounty hunters should take care of things. But complications ensue, especially when Mafia interests enter the picture and when Williams' mistress, Lateesha (Mo'Nique), a "blacktino" woman with massive earrings that spell out her name, gets desperate enough to steal in order to save her ailing granddaughter.

Director Tony Scott generally makes disposable, testosterone-heavy entertainment like Top Gun and Crimson Tide, but perhaps realizing that he was never more acclaimed than when collaborating with Quentin Tarantino on True Romance, he has now teamed up with Donnie Darko writer-director Richard Kelly. The combination isn't as natural; Tarantino seems like the sort who would watch Scott's movies for fun, while Kelly is more esoteric. The clash between the two voices is most glaring during a scene in the desert, where Tom Waits shows up as a preacher and has a surreal conversation with Domino while reclining in random furniture items against the backdrop of the Nevada sands. It's a scene with potential, but Scott insists on rapidly rotating his camera around Knightley and Waits repeatedly, nonstop, in vomit-inducing fashion that's likely to distract most viewers from what is actually being said.

Kelly does get in some nice jokes about oral sex with dogs, race-based labels, and the death of Sam Kinison (points for creativity on that last one!). He also turns Domino's loathing of the "90210 world" upside down by having Ian Ziering and Brian Austin Green show up, playing themselves, as hosts of a bounty-hunter reality show that follows Domino and crew around. As the producer of that show, Christopher Walken plays the human version of "a ferret on crystal meth." Translation? He exclaims "Wow!" a lot. Like the movie as a whole, the casting of Walken offers more potential than is actually realized. Sure, it's amusing, but it isn't much more.