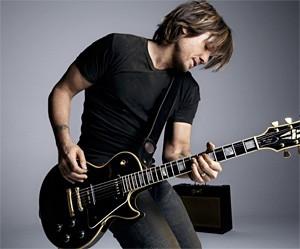 Keith Urban is the closest thing country music has to a rock star. He's married to a famous actress (Nicole Kidman), he's been in and out of rehab, and he plays arena-packing concerts that are relatively twang-free. It doesn't hurt that the scruffy, hunky Aussie is a guitar virtuoso who exudes tons of charisma. He's also a multi-instrumentalist who's been known to ditch his axe onstage for an occasional piano or banjo interlude. Urban taught himself guitar basics by playing along to Dire Straits records. He hit on a winning formula with 2002's Golden Road, wedding rock sensibilities to a straightforward country idiom. He's been a multiplatinum-selling, awards-hogging superstar ever since.

Now on tour in support of his latest album — Love, Pain & the Whole Crazy Thing — Urban, with his exuberant live performances, recalls such stage heroes as Bruce Springsteen. He's capable of galvanizing an entire audience with such standbys as sing-alongs and fret-bending solos. Now that he's supposedly clean and sober, with the love of his life by his side, Urban comes off like one of the happiest guys on the planet. We're the lucky recipients of all those good vibes.