It's time to take out Mike DeWine. 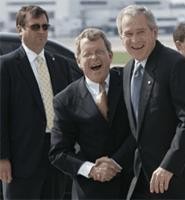 You believe in America, am I right?

I'm not talking about the Hollywood version, with its prancing silicone who age into taxidermy experiments. Not the New York version, where they got sticks so far up their ass they rival the lumber selection at Home Depot. And certainly not the Washington version, where high school class presidents migrate to play statesmen, then behave like human Pepsi machines: Insert $1 and select the legislation of your choice.

What I'm talking about is the real America. The stranger who helps push your car out of the snow. The neighbor who watches your kids when you're late getting home from work. Boys playing pick-up football, mechanics who don't steal, waitresses who call you "hon," old ladies at Mass who smile with the voltage of 1,000 angels.

That America. She's a good one, don't you think?

Which is why we gotta take a guy out.

You can find him every night on basic cable's leading source of comedy, C-SPAN. It's where he and his pals shout for attention from the Senate floor, preening for their one true love: Camera Time. Where wooden replicas of great men issue brave calls for action in speeches written by some kid they hired from Yale. Where cute little guys shake their fists like Orange County tennis pros, prattling on about how they're fighting for you.

DeWine is not the worst of them, which is kinda like saying Herman wasn't the worst guard at Treblinka. He's what's known as a moderate Republican, which means he only plays the Fag or Flag or Pledge of Allegiance cards on special occasions -- like when he's trying to get re-elected. For the most part, he's supposed to represent the business faction of the party -- the guys who said they'd bring an executive's sensibility to covering the people's money.

They haven't done so well. That's why FEMA trailers now cost us $70,000 a pop. Why Halliburton can't account for $250 million in spending, but we pay the invoice anyway. Why deficits are growing faster than you can count with a public school education.

Unfortunately, this isn't happening due to stupidity, which can always be forgiven. It's happening because they're whores.

Let's take a look at these skanks in action, shall we?

Recall, a few years back, when Congress debated the prescription drug program for elderly people. Here was a chance to repay the men and women who built this great country (see argument about the beauty of America) before a new batch of assholes (see U.S. Senate) ruined it.

Now one might think Republicans, artful merchants all, would be able to negotiate a good deal. They were supposedly working on behalf of 43 million seniors. With this kind of buying power, not even a third-shift manager at Arby's could blow it.

Then the pharmaceutical industry showed up. Dumped more than $20 million in campaign contributions on Washington that year. Upon thoughtful reconsideration, Mike and his pals suddenly decided they didn't really give a shit about old people after all. So they purposely inserted a clause barring government from negotiating drug prices. You heard that right: In DeWinean economics, one always strives to pay the highest price possible.

The bill was supposed to cost $534 billion over 10 years. But thanks to Congress' keen mercantile skills, the price has doubled.

We tried to ask the good senator about his unique sense of austerity. "I'm going to have to get back to you on that," said his spokeswoman, Breann Gonzalez. She never did.

But you don't need DeWine to explain his votes. Just look at his campaign finance forms to see who he sleeps with. Since he's been in office, he's taken $3.2 million from the finance, insurance, and real estate industries, $1.5 million from health and pharmaceutical companies, $1.6 million from lawyers and lobbyists. His biggest contributors read like a list of People You Really Don't Want Babysitting Your Kids: Timken, Forest City, MBNA, FirstEnergy.

In the old days, they called people like DeWine "kept women." You put 'em up in an apartment, pay their expenses, then take 'em out for a spin when you need 'em.

Which is the sad thing about America -- the good America -- that I was talking about. Here we have this great country, but we keep electing whores and morons to represent us. It's as if somewhere along the line we decided that, if we send people like DeWine, Kucinich, Ney, and Boehner to Washington, they won't call at dinnertime to sell us vinyl siding or high-interest mortgages.

But the problem is they're sucking us dry -- and they're taunting us in the process.

DeWine whored because he thought he could get away with it, thought you were too stupid or impotent to take revenge. It's the same thing Democrats do in Cleveland -- Frank Jackson and Jimmy Dimora with their crooked land deals, Mike White turning the city into a giant Wal-Mart. They're saying to you, "Hey, dumbshit, I'm taking your money. Try stopping me."

They're laughing in your face.

We can't kill the Democrats; in a one-party system, we're stuck with the skanks we got. But DeWine is different. Sherrod Brown's got him on the ropes.

I'm not literally talking about killing him. Get a load of his picture. God don't want you smacking around guys who pick their bowling balls from the kids' rack. I'm just saying that in America -- the good America -- we shouldn't be represented by a guy you wouldn't even want on your softball team.

Of course, nothing will really change if we take him out. When it comes to delivering new whores, Washington has endless manufacturing capacity. But for just one day, we have the chance to rise up, to punch back at those who curse this great land.

Besides, revenge is a very underrated emotion.

So, should we bag us a skank?