Kevin Kelley on What's to Come for Cleveland City Council 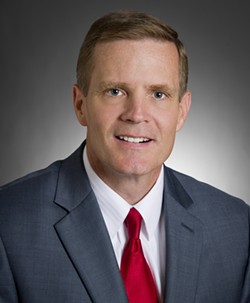 Monday morning, Cleveland City Council President Kevin Kelley sat down with Scene at his City Hall office, beneath the mayflies' gaze, to chat about council's agenda for the next three years. Kelley gave a talk at the City Club last week and we wanted to follow up on a few of his key points.

Kelley's City Club remarks hewed to the central metaphor that a government's animating force should be the maintenance of a city's "bones" and "soul," its infrastructure and social well-being.

Indeed, the title of Kelley's talk, "Civitism," was a term coined by former Cleveland Mayor Newton D. Baker and was described, by Kelley, as patriotism's municipal equivalent. Kelley averred that Cleveland's greatness depends mostly on "the intensity with which its citizens love their city as a home."

At which sentiment Scene basically rolled its alt-weekly eyes, but at which nonetheless — and we'll admit — we were touched. (Over and above the fact that Kelley's 30-minute speech followed by 30-minute Q&A was far and away more substantive and effective, policy and rhetoric-wise, than Mayor Jackson's State of the City conversation in March).

Kelley has managed to preside over a rambunctious council with a balanced hand during an awfully tumultuous "pivotal moment" in the city's history.  We thought it couldn't hurt to delve a little deeper:

It's been a year of "incredible highs and incredible lows" for Cleveland, to use a Frank Jackson term. What are some notable highs and lows from the legislative perspective?
I think we’ve done some great things. In terms of things that really affect people, I’m very proud of having passed the domestic partnership legislation.  With the RNC, that was a big granting of authority, a big omnibus kind of thing. At the time, there was a lot of RNC euphoria, but looking back, after almost a year, I still think that it’s the right piece of legislation, that it’s the right amount of authority to give for this particular purpose. The reason I think that is because the big expenses aren't coming from our general fund. I'm also very pleased with the resurfacing strategy that we came up with. I knew year one was going to be imperfect, but I think it’s worked out as well or better than I anticipated.

[Jackson's Chief of Staff] Ken Silliman had some reservations about the resurfacing plan. Has there been any changes?
We’ve reached this agreement and we’re going forward with it. Ken believes that they can use these dollars to leverage NOACA dollars [for resurfacing major thoroughfares], which is true, but you have to look at this with some perspective. It can’t all be one or the other. The agreement we've come to leaves money for both. In a short period of time, this is going to be impactful.

Not to throw softballs, but how are you liking the role of City Council president?
No, it's a good question. For a long time when I was asked that question, I would just say, 'it’s great. I love it.' And I still do, but up until November of 2014, it was the RNC, it was LeBron, it was historic tax credits and ribbon cuttings and progress and progress and investment. When we started approaching the DOJ announcement, that was… it took all the oxygen out of what we did as council and government.

Which made being president harder?
You've been present at council meeting so you see that people argue and talk about me, but that's politics, that's business. I can deal with that. I can still focus on, are we moving legislation forward. But this was more stuff you take home with you. Tamir Rice, the DOJ report. It all came at about the same time and it changed my perspective. It made me step back and take inventory. Because here was a problem that I can’t really solve. I can do everything right, but there’s still pain. I couldn’t point to the answer or pass a piece of legislation. It’s like, we really need to get out and engage with the community and try to solve this thing.

There was some concern that the listening tours, for instance, actually weren't that effective.
There was, and there is still, a lot of emotion and volatility. People are angry and they want to focus it somewhere. At that point, council was as good a place as any. And the job became listening and absorbing that. That changed how I managed my agenda and goals.

Are you concerned about the successful implementation of the Consent Decree?
Yes. Absolutely. This stuff is expensive. If you’re dealing with a large budget, when you talk about the capital stuff, we can get there. Tell me a number and we can find a way to get there. Where things are uncertain and when things can get really expensive really quick is when you’re talking about personnel. And if you get equipment, what people don’t talk about is: What about software upgrades? What about maintenance? What about the storage of data? That’s the stuff where this could take on a life of its own. I’m very concerned financially, but we’ll get there. I don’t know how,but we will.

One of the major agenda items you mentioned at the City Club last week was infant mortality. You said you arrived late on this issue — what was the hold up?
The issue had always been there but it was always, quite frankly, I didn’t know just how bad things were. I didn’t know how bad we ranked. When I first was President, Joe Cimperman came to me and presented the issue and I looked at it more as, we’re going to fund MomsFirst because we know they do good things. So we funded MomsFirst, and we were happy. They’re still doing good things, but this year when the budget came back again and Joe came back, I started looking and having conversations with the Mayor and we wanted to find ways the money would really make improvements? There are a lot of good people doing a lot of good work, but we’re not collectively working together and solving the problem.

So are you envisioning a task force?
I’m envisioning like a, yeah, like a task force or larger umbrella organization that’s gonna make this issue a priority. We need to identify best practices, coordinate the effort and scale up the resources, which is a government way of saying find the money.

I'm glad. This is a huge issue. Pretty embarrassing that we've got one of the best medical facilities in the world and this is happening right in its backyard, so to speak.
I wonder if the term “infant mortality” isn’t too academic or too clinical. Maybe we should call it “dead baby syndrome” or “our babies are dying” syndrome, something more shocking. Maybe we should say something like, 'your baby is more likely to survive in a developing nation.' We’ve gotta shock them. We need to be shocked. The tragedy and the optimism of this issue is that we know what works. We've got to do it.

You mentioned the East Cleveland issue in your speech. You've always had pretty measured comments on the merger conversation, but what's your take now?
Personally, I’m in favor of it, but it’s not a foregone conclusion, and I’m trying to be respectful of East Cleveland. I don’t want to create a political issue. If this is something East Cleveland wants, I’d welcome the conversation. I am trying to be measured. If I thought being a champion of the issue would help, I would. But if Gary Norton can’t deliver the message, what can some white guy from Old Brooklyn do?

Are you getting pressure from any Cleveland city officials or business community leaders about this?
Not tremendously. Not really. People have approached me, but It’s not like a front-burner issue.

You also talked a lot about ongoing development in your talk. Do you ever fear that all these new projects and districts might be coming online too quickly?
The way I look at this is: People who are smarter than me and who get paid a lot more than me are making these decisions to invest.  I think that for a long time, if you look at other big Midwestern cities, there’s been a demand to move downtown that we’ve never had in Cleveland. Now that it’s there, that energy has been pent up and I think that the interest is solid and will continue on. I’m not in the business of forecasting hotel space, but somebody must be doing that, right?

I, for one, think the hotel math is really tough. And by tough I mean unrealistic.  The downtown residential numbers are more encouraging, but in the back of my mind, I keep thinking that all these young professionals are just five or 10 years away from moving to Avon Lake or Brunswick.
Well, the pattern is that young professionals move downtown and when a major life event happens — marriage, pregnancy, something — they will move to a single-family house, but we also are seeing empty-nesters coming back downtown as well. I think that pattern is sustainable. One thing that I’d really like to do is some sort of outreach or marketing campaign to this cohort of people who are living downtown and say listen, when an event happens, instead of thinking you need to move to Grafton, think about a Cleveland neighborhood. Invest in a Cleveland neighborhood.