Pixar's latest is no lemon, but it does have that used-Cars smell. 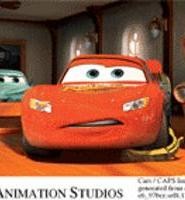 Cars, the latest vehicle to roll off a Pixar assembly line that has thus far yielded nothing but spit-shined classics, answers that age-old question: What would Doc Hollywood have been like if it had been populated entirely by, ya know, cars?

If the promise of that particular premise -- in which a hotshot (in this case, a hot rod) gets stranded in a small town on his way to Los Angeles and finds love among the ruins of what used to be paradise -- doesn't exactly rev your engine, fret not. Cars takes a little longer than most Pixar pics to get from 0 to 60, and it does so in fits and starts, and not without a little backfiring -- but eventually it gets you where you want to go: the promised land of impulse-purchase trinkets and happy endings.

From this vantage point, it's hard to embrace a movie that casts yee-har-dee-harrin' Larry the Cable Guy as a redneck tow truck one stiff breeze away from falling apart at the rusty seams; pandering, I think they call it. Yet it's also director John Lasseter's most elegiac offering, an ode to the bygone days of dusty roads winding through small towns in which nothing ever happens except the crawling of time. That probably explains the turgid pace, with all the traction of a boxcar going uphill in molasses. The movie begs its audience to slow down and appreciate the roadside attractions passed at light speed from the freeway. Even the music, by Pixar stalwart Randy Newman, sounds like a 45 played at 42 rpm. Ironic that a movie about a race car named Lightning McQueen (voiced by Owen Wilson, who sounds as though he's never in a hurry to get anywhere) would wind up the least frenetic of Pixar's offerings; compared to this, Finding Nemo and A Bug's Life positively vibrate.

Cars takes as its jumping-off point the 1952 Disney short Susie, the Little Blue Coupe, which tracks the life of a pert, cherubic vehicle as she rolls off the assembly line and finds new life as a race car. Susie eventually and metaphorically gave birth to The Love Bug in 1969, which makes Cars less a work of wonder than the modernizing of a hoary classic. We've seen this before -- a claim one couldn't make about earlier Pixar movies, which weren't constructed from quite so many pieces lifted from the cartoon junkyard.

Ultimately, though, what makes it feel less special are the cars themselves -- animated Hot Wheels with familiar voices locked in obvious rides (Say, isn't that George Carlin as the hippie VW van pushing alternative fuels? And Cheech Marin as the low-rider? And Tony Shalhoub as the tire seller with the pizza maker's accent?) that possess the most lifeless eyes this side of the shark in Jaws. Rather than use the headlights for eyes, Lasseter sticks them on white windshields (à la Susie), where two black dots seem to float hither and yon, with no real sense of purpose. There's no anguish behind those blank eyes -- no desire, no joy, no love, no nothing, save what the audience chooses to see reflected in them. They're so vacant, they're almost distracting -- perhaps because for the first time at a Pixar movie, you feel like you're just watching some expensive cartoon manufactured on a computer; it doesn't dazzle or wow even at the surface, much less tug at something deeper within.

Cars feels less like a heartfelt statement from a shrewd businessman doubling as a visionary director -- a tinkerer and a dreamer, as Richard Corliss rhapsodized about Lasseter in a recent issue of Time -- than something created to move product. And it takes six guys to write this? That can't be right.

As for the story itself, well, it is Doc Hollywood, with Wilson's Lightning in the Michael J. Fox role as the brash upstart trapped in a small town (Radiator Springs), forced into community service after tearing up Main Street. There, he meets the outwardly gruff Doc Hudson (Paul Newman, a real crankcase, coughing up miles of dirt road), who's got a soft spot under the hood for the kid who considers himself a champ without a title. Lightning inevitably has to choose between the small-town life with the small-town wife (Sally Carrera, the purple Porsche voiced by Bonnie Hunt, who is, again, the last person one associates with the word "animated") or the big-time spotlight that comes with being a race-car champ. Whatever will he do?

Yet what ultimately redeems Cars from turning out a total lemon is its soul. Lasseter loves these animated inanimate objects as though they were kin, and it shows in every beautifully rendered frame. And so the movie slowly grows on you, its familiarity be damned. It's just, well, a disappointment following the grown-up comic book that was The Incredibles, which (barely) concealed its emotions and maturity and profundity in superhero spandex. But do stay for the ending, which tricks up scenes from Pixar's previous outings and makes you miss them even more.