Lone Scherfig yanks our chains with a darkly comic meditation on love and suicide. 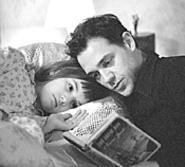 Suicide made merry. Brotherly devotion tinged with carnal deceit. Personal tragedy transformed by malicious humor. These are some of the oil-and-water notions advanced by Lone Scherfig's Wilbur, a mood-switching meditation on love and death that goes out of its way to yank our chains. From the sly come-on of her title to the surprise of her setting (a working-class neighborhood in Glasgow) to the cruel, comic twist with which she sends us to the exits, the Danish filmmaker boldly assaults our long-held expectations -- the expectations of moviegoers all too cozy with the rules of genre and type.

If Scherfig's 2000 hit, Italian for Beginners, was all about emotional repression, Wilbur goes it one better. Because the title character here, played by a handsome and slightly wild-eyed young actor named Jamie Sives, is indeed obsessed with ending his life. As with Bud Cort's bleak inventiveness in Harold and Maude, there's no oven this Wilbur won't stick his head into, no length of rope he won't fashion into a noose. In one particularly perverse (and savory) incident, he decides to slash his wrists because the server at a cafeteria tries to give him Brussels sprouts.

Why the doctors haven't stuffed the disturbed, window-smashing Wilbur full of new-wave antidepressants is anybody's guess. As it is, his one lifeline to the future is his saintly but delusional brother, Harbour (Adrian Rawlins), who heads off each new suicide attempt with patience and a friendly word -- half-believing, it seems, that Wilbur is crying wolf. He's not, of course, but he's at once sweet and maddening because he's made such a personal sacrament of his despair. There are some moments here when you may feel like saying, "Go ahead, you self-absorbed jerk. Get it over with."

In time, though, whatever annoyance we feel passes as Scherfig subtly shifts gears on us. When Alfred Hitchcock famously praised "the trick of switching from grave to gay," he was referring to his favorite American moviemakers -- and probably to himself. But Scherfig has that gift, too. Once she complicates the saga of two brothers wrestling with death -- through the addition of a downtrodden single mother they both come to love (Shirley Henderson) and the little girl who comes to depend on them (Lisa McKinlay) -- Scherfig is free to range into black comedy, romance, and bloody melodrama. That she generally juggles the different tones with deftness is a tribute to her skills; that she sometimes fails is almost inevitable. But we must applaud the effort: Wilbur intrigues, and it keeps us on our toes.

The psychiatric establishment isn't likely to endorse what it sees here -- any more than it endorsed the fascist Nurse Ratched in One Flew Over the Cuckoo's Nest or the dicey medical ethics of I Never Promised You a Rose Garden. Wilbur's shrink grows so weary of his self-destructive antics that he bans him from a therapy group, and one horny nurse insists on licking the patient's ear. Cut loose from the guys in the white coats, Wilbur hangs around the bookshop his late father left to the brothers, where -- in one of the nice little jokes so prevalent in the film -- he sells to a man interested in Kipling a book about pickling. More important, when the changing dynamics of the brothers' relationship results in a role reversal, the idea of a death wish takes on a new, highly ironic meaning. Scherfig brings off Wilbur's renewal with grace and some surprising jolts of humor, and in the end we find ourselves confronting our own mortality, too. When Wilbur saves someone else from drowning, and even when he stands on his head for the little girls at a birthday party, we know something essential has changed inside him -- despite his several betrayals.

The thick Scottish burrs and mysterious Glaswegian slang that we encounter here are sometimes difficult on American ears, and not everyone will go for the film's disorienting collisions of farce and darkness. But this vivid examination of brotherly love and its consequences never stints on the complexities of the heart or the fascinating ambiguities of life. Nicely acted and boldly directed, it's a movie for grown-ups, and that's meant as a high compliment.