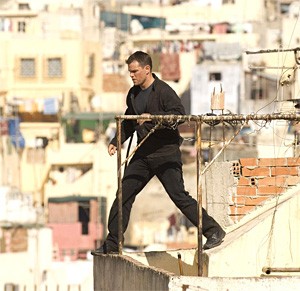 The Bourne Ultimatum (Universal)
The final installment in the Bourne-again trilogy is the one in which the CIA assassin's true identity is revealed. It's the origin story in reverse — how brilliant. But solving the mystery (and misery, as Jason Bourne's among the most tormented action heroes of all time) is only half the kick. Paul Greengrass, back for his second Bourne picture, makes the most sprawling yet intricately intimate action movies in cinema history — globe-trotters welcome, but claustrophobics need not sign up. As befitting a film in which you're constantly asking How'd they do that?, there are copious mini-docs on everything from shooting on location (from Berlin to N.Y.C.) to Matt Damon's behind-the-wheel chops to the rooftop chase sequence in Tangier. And the deleted scenes suggest Greengrass excised the political to make it more, ya know, personal. — Robert Wilonsky

December Boys (Warner Bros.)
Hogwarts alums get to pick from two pics this week: Harry Potter and the Order of the Phoenix or this teensy-tiny imported indie in which Harry Potter (which is to say, Daniel Radcliffe) loses his virginity in a hippie chick's cave (an actual cave, mind you; no metaphors here). Radcliffe plays the oldest of four Aussie orphans sent to spend a summertime Christmas on idyllic shores owned by a kindly couple; all the kiddos, save for Radcliffe's Maps, want to be adopted — especially wee Misty, who narrates the film from middle age. And while the whole thing's terribly twee and predictable, down to the waving of Maps' wand by cutie-pie Lucy (Teresa Palmer), December Boys is also win-you-over charming — a standard coming-of-age tale told with great conviction and sincerity. It ain't magical, but it'll do. — Wilonsky

Interview (Sony)
Two assholes sit at a table. One's a pompous asshole journalist, the other an entitled asshole starlet. They draw lines in the asshole sand and yell asshole things at each other. Co-written and directed by Steve Buscemi (who also plays one of the assholes), Interview is a remake of a movie by Dutch filmmaker Theo van Gogh, who was later murdered by Muslim fundamentalist assholes. It's surprising fun watching Buscemi and Sienna Miller be assholes to each other, at least for the first hour or so. Then again, potent performances and writing can't stop one from tiring of being the silent third member of a gigantic assholefest. But Buscemi slowly reveals the people inside the assholes (so to speak), creating something richer than, say, a Neil LaBute 100 percent asshole bonanza. — Jordan Harper

Undead or Alive (Image)
Stop me when it gets too painful: This western zombie comedy stars Desperate Housewives hunk James Denton and SNL alum Chris Kattan as bumbling cowboys fleeing a posse of the undead, courtesy of a curse laid on them by Geronimo, whose buckskin-clad babe of a niece travels with our heroes, lecturing them about the sins of Western civilization and sparking a romance with Kattan that's just a tad less believable than the zombie parts. It's all so very bad, a failure even as the type of unintentional camp beloved by bad-cinema aficionados. Written and directed by a former South Park writer, the movie wants to be the kind of awesomely carefree crap you'd see in Trey Parker and Matt Stone's Cannibal! The Musical, but it's nothing more than unremarkable, which of course is the greatest sin that a cowboy zombie comedy can commit. — Harper