The Cult's Ian Astbury has grown wiser, but he's still at odds with his own ideology. 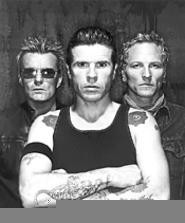 With his sharp cheekbones, bellowing voice, and confident swagger, Cult frontman Ian Astbury was -- and still is -- a rock and roll sex symbol. He has never refrained from writing about sex, either. Yet somehow he's offended by a flesh-flaunting cover of Maxim magazine, the likes of which contribute to the "sexual chaos" of today.

Referring to a rape incident in the pit at a Cult show in Boston, Astbury asks, "How do you expect young men to react, when they're liquored up and they're used to seeing nothing but images of these gorgeous women that they're never going to get in their lives?"

This is only one of the contradictions that rises out of a conversation with Astbury, the man who not only introduced the first Lollapalooza-style festival tour (the ill-fated Gathering of the Tribes), but also turned the refrain "Ooh, baby, baby, baby, baby" into a kind of nonsensical transcendentalism. Astbury complains about the way media conglomerates control the music industry, noting that "politics" force his band to play festival shows that shill for radio; yet he records for Atlantic, one of the biggest corporate rock powers. And he applauds the D.I.Y. fashion sense of the early punks, but goes on to lament the loss of a pair of "bell-bottomed hipster trousers," designed by Gucci's Alexander McQueen, that he somehow misplaced after wearing them on The Tonight Show.

The father of two sons, ages five and seven, Astbury realizes that the Cult, which formed as the goth-punk act Southern Death Cult in 1981, has barely existed during the lifetimes of his children. Indeed, the band, whose commercial peak came after the release of Sonic Temple in 1989, had been on an extended hiatus until it re-formed for a greatest hits reunion tour two years ago.

But if Astbury is uncomfortable in the conflicting roles of parent and rock star, or with intellectual positions that conflict with one another, he doesn't let on. He says that he'll be bringing his sons with him on the Cult's summer tour in support of Beyond Good and Evil, the band's first record since a commercially disappointing self-titled release in 1994, and he explains that the Cult's music, past and present, is about good old-fashioned "sexual energy." Children or no children, Astbury is a larger-than-life rock star, a deliberately mythic figure who won't wince at giving the explanation that his band's music "rises out of our collective unconsciousness." As such, he's the antithesis of the low-esteem, stardom-shunning grunge and indie-rock heroes who replaced him when the band fell off the airwaves in the mid-'90s.

"They were sexually impotent," Astbury says. "Their music didn't celebrate sexuality. Look at how they dressed. They didn't dress like peacocks. They dressed like filthy heroin addicts, which is what they pretty much were, most of them. The Cult came out of punk rock. The kids who came out of punk rock were peacocks, because we had nothing. We came out of these oppressive, working-class environments, so what we did was make the most of what we had. We didn't celebrate the fact that we had nothing and say, 'Look at us, we've got nothing.'"

And it's with this belief in the triumph of spirit over mind and culture that Astbury, like Friedrich Nietzsche (whose philosophy inspired the title for the Cult's latest album), arrives at an odd kind of clarity. Celebration of this spirit is central to the Cult's music. On Beyond Good and Evil, songs like "The Saint," "Rise," and "Shape of the Sky" all use insistent, heavy riffing to pay tribute to Native American philosophies and Buddhism, which Astbury began to practice after a visit to Tibet, following his father's death in 1995.

"In the West," he explains, "we're so wrapped up in ourselves, because we consider our point of view to be the only way. It's sort of like the piety that you have in sports, when you have the world championship of the National Basketball Association, which isn't played in the world at all. There're six billion people on the planet. The U.S. is only 250 million. The U.K. is only 56 million."

The dark, brutal character of the band's new album reflects Astbury's worry about the world, both as a rock star and as a father. He sees exploitation in more than sexy magazine covers.

"I'm so adamant about [the environment] because I lost both my parents to cancer," he says. "It was directly linked to the fact that we lived next to two steelworks that pumped out all this shit out into the lakes, and the rates of cancer in that area are very high. And, of course, my parents were just working-class people, and we had no knowledge of it at all. We were just like 'Oh, my God, it's a modern disease. They've contracted cancer, and they've both died. It's so sad.' But after a while, being a little bit older and actually doing a little bit of research and speaking to some other people's experiences, you begin to realize that it's not OK -- that these corporations have absolutely no interest in the populace. All they're interested in is profit."

Astbury, on the other hand, seems genuinely concerned with the people his music might influence. He talks about how he identifies with those few kids in his audience who are trying to be "individuals," and he hopes that he can open their eyes to other cultures and ways of thinking.

"When my father died," Astbury says, "I didn't want to be a part of the West, of this society, of this band. But now that I have children of my own, it's woken me up to my own accountability, and it's forced me to be more honest in my art."