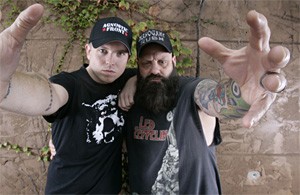 This is one show that both adventurous 'NCX listeners and full-contact hardcore kids can agree on: Kingdom of Sorrow features Hatebreed frontman (and honorary local, left in the picture) Jamey Jasta on vocals, with Down/Crowbar guitarist Kirk Windstein (right) serving up thick southern-baked riffage. And while, somewhat predictably, the band's long-delayed full-length debut sounds like Hatebreed with the dude from Crowbar on guitar, the end result works unpredictably well. Songs like "Led Into Demise" explode from a dirge to a power-pit experience in mere seconds, creating a fertile new genre: stoner hardcore. The power of the riff compels them.