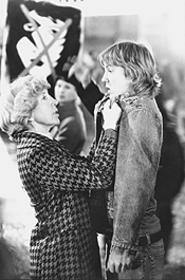 Do not be fooled: Gene Simmons, Paul Stanley, Ace Frehley, and Peter Criss receive top billing in Detroit Rock City, but Kiss doesn't actually appear in the film until its final three minutes. And when they do show up, clad in their de rigueur leather-and-greasepaint getups, it's simply to perform the film's title song during a rather tepid, workaday concert sequence; think VH1, not even MTV. The concert footage doesn't even seem as if it's part of the movie. It has that slapdash, tacked-on feel, as though it could be any band up there. Worse, the scene is clearly taking place in 1999, not 1978: The wrinkles beneath Ace Frehley's makeup are like rings in a tree, giving away his age on the big screen. It's an unintentionally disquieting moment in a movie full of them.

Detroit Rock City might not have been such a disappointment — the less Kiss, the better these days — had there never existed Kiss Meets the Phantom of the Park, perhaps the most stunningly dreadful rock-and-roll film ever made. Even now, images from that 1978 made-for-NBC special remain burned on the cerebral cortex, none more so than the lasers shooting from Space Ace's eyes or the flames pouring from Gene Simmons's mouth as he descends from the heavens. And who will ever forget the way Paul Stanley delivered his dialogue through a macho lisp on loan from Quentin Crisp? Or Peter Criss's contemplative "Beth" solo? Emmy, thy name is Catman.

Alas, there's not a single such moment to be found in Detroit Rock City, which is nothing more than a turgid, unfunny, out-of-time rocksploitation movie about four stoner teens trying to get into a Kiss concert at Detroit's Cobo Hall in 1978. (First-time screenwriter Carl Dupre based the film on his own teen fetish.) Not even the murky, weed-scented haze of nostalgia can obscure the movie's emptiness; it's like a Kiss record come to life, a whole lot of something about nothing at all. It wasn't a good sign when, during a recent preview screening, a few audience members got more excited hearing Van Halen's "Running With the Devil" than any of the dozen or so Kiss cuts that permeate the dazed-and-confused soundtrack. And it might not have been a wise decision to use three AC/DC songs; "Whole Lotta Rosie" absolutely emasculates the uh-was-it-always-light-rock? "Shout It Out Loud." Who knew that all along Kiss was nothing but four heavy-metal Neil Diamonds in clown makeup? No wonder my parents were never scared of Kiss; I think my dad went to Hebrew school with Gene Simmons.

Ah, if only Hawk (Edward Furlong), Lex (Giuseppe Andrews), Jam (Sam Huntington), and Trip (James DeBello) had wanted to party down with Bon Scott and Angus Young; then you'd have a movie. Instead, these four high school buddies spend their evenings toking up and playing Kiss covers down in the basement. They dream of opening for Kiss one day — the quartet bills itself as Mystery, the "s" written in Kiss's signature font — but until then, the boys will have to satisfy themselves with just seeing the band in nearby Detroit. The only problem is, Jam's old lady (Lin Shaye) is a member of a Karen Carpenter-loving, God-fearing anti-Kiss organization; the only way she'll let her boy see the Knights in Satan's Service is over her dead body. "You want to reach out and touch pure evil," she admonishes her boy. "And in Detroit, no less." One thing leads to another, and of course, she ends up burning the boys' tickets — using the flames to light her chain-smoked cigarettes.

The foursome spends the rest of the movie trying to score admission to the defining moment of their young lives. Long (very long) story short: Guys have tickets, lose tickets, get more tickets, go to Detroit in Mom's "borrowed" car, get in fight with disco boys, lose tickets again, then split up in search of even more tickets. (Never in history have four people been more unable to keep track of slips of paper.) Hawk ends up performing a drunken, vomit-drenched striptease in a ladies-only club — for the money to buy tickets, of course — and getting it on with an older woman (waaay-ex-Playmate and Gene Simmons paramour Shannon Tweed) in the backseat of her car; it's not a little prurient when she hands over $100 after their dirty deeds done dirt cheap. It doesn't help matters that Furlong's a fairly dreadful little actor; it's doubtful he has even stood outside the Actor's Studio. He plays a doper like a kid who has never even inhaled secondhand smoke.

As for the rest of Hawk's buddies: Jam finds love in a confessional booth with the girl of his nocturnal emissions (named Beth, of course) and has it out with his mom; turns out she's less scared of Kiss than she is of losing her baby boy too soon. Lex saves his mother's stolen car and rescues a kidnapped girl (named Christine, as in "Christine Sixteen," played by Slums of Beverly Hills's Natasha Lyonne). And Trip, on the verge of committing a convenience-store holdup out of desperation, winds up becoming a masked hero. Detroit Rock City seems to exist in one of those alternate universes, where really interesting things happen to really boring people. It's amazing how four virgin high schoolers can round up four willing girls in ninety minutes — and in a city they've never stepped foot in before.

Finally, the boys decide the only way they're going to gain entrance into the arena is to beat the holy crap out of each other and insist someone stole their tickets. It's an inexplicable, overwrought, bloody finale — and for what? To watch Gene Simmons spit fake blood all over his hairy paunch?

Detroit Rock City, like the just-released Dick, is caught between two audiences: the teen converts to whom it's aimed and the post-thirty crowd that actually gets the joke. Doubtful Kiss's current audience, the kids buying Psycho Circus (or, more likely, selling it back at the used-CD store) or Kiss's Todd McFarlane-anointed comic book or shelling out allowance money for the never-ending reunion tour, will connect with the '70s references, the Fonzie/Dynamite magazine/Charlie's Angels images that speed past during the opening montage. What? Some sixteen-year-old is gonna see Shannon Tweed or Ron "The Hedgehog" Jeremy, as the strip-club MC, and think: "Ah, sweet porn of youth?" Not likely. They'll just wonder who the short dude is with the big 'fro.

And it's equally unlikely that Kiss's original crowd will tolerate such low-rent teen-flick high jinks. Anyone who has had their driver's license for more than two years has seen this territory covered better in such films as Rock 'n' Roll High School, Fast Times at Ridgemont High, and Dazed and Confused, the latter ending with a cathartic drive to Houston for some Aerosmith tickets. Detroit Rock City actually sits on the food chain somewhere between Rock 'n' Roll High School and its 1990 "sequel" Rock 'n' Roll High School Forever, meaning: Kiss ain't the Ramones, but at least Edward Furlong ain't no Corey Feldman. But just barely.