Glen Phillips begins anew in the wake of Toad the Wet Sprocket. 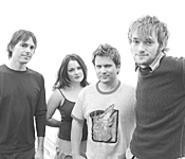 Glen Phillips wasn't old enough to drive when he joined Toad the Wet Sprocket. Five years later the band's third album, Fear, went platinum on the strength of heavy MTV rotation and the massive single "All I Want." It seemed as if Toad, fronted by Phillips's romantic lyrics and sensitive, falsetto-tinged crooning, became in the blink of an eye a highly visible alternative to the "everything's-turning-to-grunge" world of early '90s rock. And while success breeds success, it also causes problems.

For starters, up until Fear, all songwriting credits -- a significant part of a successful band's income -- were shared equally among the band's four members, despite the fact that it was Phillips who penned the entirety of the band's lyrical output and about half of its music. Dulcinea, the sequel that came three years after Fear, put an end to that practice, with Phillips now claiming his words as his own. As did its predecessor, Dulcinea also turned platinum, but even without the advantage of hindsight one could see the beginning of the end.

"We did as well as we could," Phillips says of Toad the Wet Sprocket. "It started out very idealistically, but for bands where everything is really split equally, I think everybody needs to have their extra roles defined, so nobody feels taken advantage of. Because once I start feeling that way, then I walk around resenting them. And if I'm walking around resenting them, they're pissed off at me because I'm the jerk lead singer who thinks he controls everything."

"Kind of the nice way to say it," he says of Toad's final days, "was nobody was particularly happy."

Would he be willing to try the band route again?

"Right now I like the idea of projects, I guess, as opposed to bands," Phillips says.

Like Phillips, the contemporary bluegrass trio -- guitarist Sean Watkins, his younger sister and fiddler Sara, and mandolinist Chris Thile -- began playing together before they even had their driver's permits. Their eponymous first album went gold. Their second, This Side (which included a cover of Pavement's "Spit on a Stranger"), earned a Grammy for Best Contemporary Folk Album. And in late 2000 the three, along with the former Toad frontman, entered Phillips's home studio with producer Ethan Johns.

For six days in December the foursome rehearsed, recorded, and mixed 11 songs -- all sung by Phillips. Thus was born the project called Mutual Admiration Society.

"What defined it," Phillips says of the sessions, "was the fact that we weren't thinking too much. It was essentially unrehearsed. We would run through the song a few times, and everybody would figure out some part where they'd play, but it was pretty much on the spot.

"It's the kind of album that doesn't really exist anymore. People don't just make an album and put it out."

Of course, a case can be made that the resulting disc, Mutual Admiration Society, wasn't exactly rushed to release. Copies began to show up in public a little less than a month ago. So just what caused the three-year-plus production delay?

"Let's just say it's the magic of the music business," Phillips laughs.

Three years, however, provide ample time to reflect on what might have been.

"The main thing that I would've really liked," Phillips says, "was to get them singing more. That's the one thing that really lacks for me. Basically, they learn songs faster than I do, so I brought in a bunch of stuff and I just ended up singing. I was fine with that. I just wish I hadn't ended up singing the whole album. When we do another one of these, they're going to be all over it."

"Yeah, we've always intended on doing another one."

First, though, Mutual Admiration Society will tour for the better part of a month. And though the album is primarily acoustic, the group will bring along a rhythm section that's rock history personified -- drummer Pete Thomas of Elvis Costello's Attractions and Hall of Fame bassist John Paul Jones of Led Zeppelin.

"Once again, the theme of this thing is having fun," says Phillips. "They were talking about having a drummer out, because they've never toured with a drummer. I'd just finished a record, Pete played on it, and I love his playing and thought it would be great. They had just met John Paul Jones and figured no one ever asks him to do anything like this, so the worst that could happen is he'd say no. And then he didn't. It was just great, great luck."

Delay or not, at least the project's name is well chosen.

"We're unabashedly fans of each other," Phillips says. "It's amazing just to get back to sitting down with incredible musicians and making music. It's how it starts with everybody, but once it becomes your profession, it can get hard to remember that's why you started doing it. This is why I do this."