Until the End (Artemis) 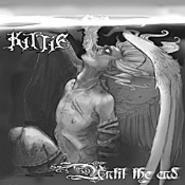 When Kittie recently hosted an all-female edition of MTV's Headbanger's Ball, the metal grrrls were hard-pressed to produce many videos with claws: After Otep and Arch Enemy, the falloff was pronounced and protracted, offering landmark acts whose work with the axe, ultimately, wasn't exactly lethal: Vixen, Lita Ford, Girlschool. Lately, the Canadian wendigos have felt such pressure to represent their demographic that they forget what brought them to the dance in the first place.

The hallmark of Kittie's unassailable debut, 2000's Spit, was its ability to experiment -- turntable backspins and techno-tinged vocals made the single "Brackish" a hit, and its popular follow-up, the equally murderous/vulnerable "Charlotte," worked because it waltzed around metal conventions. But on its second album, 2001's Oracle, the band morphed into Panteraette, benefiting little from the transformation.

Until the End is somewhere between the two: It still prefers the conventional, grinding riff over the solo or experimental noise. Singer Morgan Lander remains wholly dependent on the cheap duality of her demon growl/angel-swoon vocals, and the formulaic "Into the Darkness" is their worst song yet. "Red Flag," however, is a nod to Metallica's "Whiplash" -- a thrash classic by a band that never sounded like anybody else. And it's about time that someone besides Avril Lavigne tipped a bonnet to them.